Viral Video: Woman driver get tailed by angry lorry driver near Kinrara, pulled aside by police at the roadblock 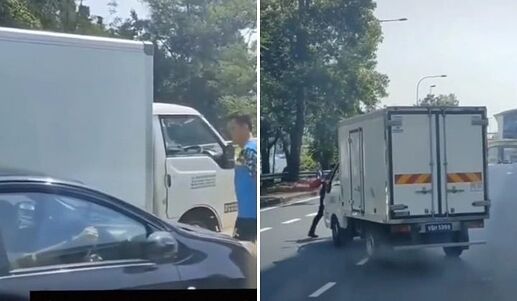 A recent viral TikTok video showed a woman driving a Perodua Axia who was suddenly scolded by a lorry driver on the road. The video garnered 92.1k likes at the time of writing.

It’s believed that the incident took place near Kinrara heading towards Bukit Jalil and the Alam Sutera LRT station.

The video showed the lorry driver, who has gotten out of the vehicle, shouting and gesturing angrily at the woman who was still in her car.

The lorry driver tailed the woman when she quickly drove off.

To her credit, the woman kept calm and continued driving until she reached the police roadblock in front. She told the traffic police what happened and the police called the driver aside.

The driver attempted to speed forward but another police officer jumped into action.

One of the policemen stood in front of the lorry to divert its path to the roadside and worked together with the other officers to get the lorry driver to comply.

Throughout the whole process, the lorry driver seemed to have difficulty driving the lorry smoothly to the roadside.

The person who recorded the video believed that the lorry driver behaved erratically because he was drunk.

The driver possibly wanted to escape from being pulled aside for driving under the influence and that was why he stopped in the middle of the road before shouting at the woman.

Netizens praised the policemen on duty that day for taking their duties seriously and some of them wanted the lorry driver to be locked up or have his driving license suspended.

They expressed admiration for the woman for staying calm and thinking quickly when she was confronted with the irate lorry driver.

They were also worried about the policeman who stopped the lorry by standing in front of the vehicle in case he would be run over.

However, a few netizens said the woman should have pulled aside to tell her side of the story and sort out the issue with the police too.

A netizen said that the woman could have hit the lorry and was playing the victim.

Whatever happened between those two drivers, it’s yet another reminder that road rage and driving under the influence never bring good outcomes.

The lorry driver has been arrested

According to Astro Awani, the lorry driver has been arrested and tested positive for drugs. He wasn’t drunk as assumed.

The woman who was in the Perodua Axia told the police at the roadblock that the lorry driver was harassing her due to a misunderstanding.

The police are also urging the woman and the dashcam owner to file a police report to help with investigations.

Although we always ask people to stay calm during the situation but how about if the case victim is ourself? Did you ever think about this?