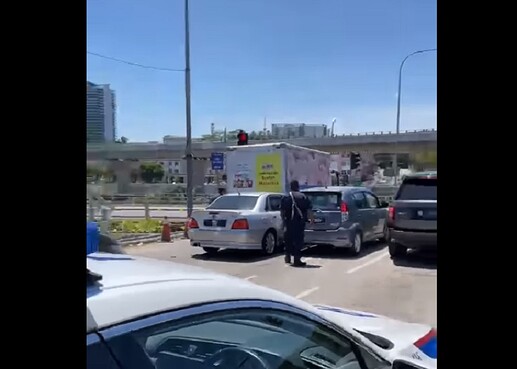 KUALA LUMPUR, Feb 26 — A one minute, 45-second video of a motorist ramming his car into other vehicles at a traffic light junction to evade police has gone viral on social media.

The incident occurred at the Sierramas traffic light in Sungai Buloh between 12.50pm and 1pm today.

The start of the video shows a police officer approaching a Proton Waja in a bid to stop and remove the driver from the car.

Another policeman was then seen approaching the car before the driver decided to reverse his car into another vehicle before ramming into the sides of a lorry and Perodua Myvi.

One of the officers then fired several shots at the tyres of the car to no avail as the car managed to squeeze between the lorry and the Myvi.

“However, the pursuing police personnel are from the Gombak police headquarters.

“I have discussed with Gombak OCPD ACP Arifai Tarawe and we agreed that he will furnish more details on the incident and issue a statement later,” he said.

So brave enough which try to run away from police