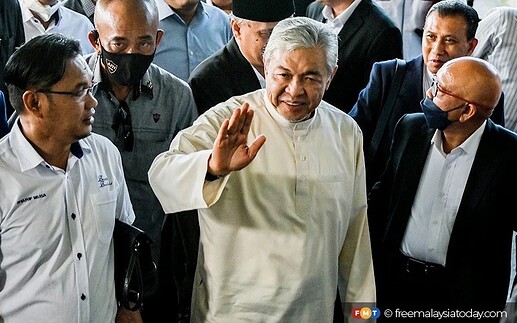 SHAH ALAM: Ahmad Zahid Hamidi has been acquitted of 40 charges of receiving bribes from a company to extend its foreign visa system (VLN) contract.

High Court judge Yazid Mustafa ruled that the prosecution had failed to establish a prima facie case against the Umno president.

Zahid, 69, had been accused of 33 counts of receiving bribes amounting to S$13.56 million (RM42 million) from Ultra Kirana Sdn Bhd (UKSB) as the then home minister to extend the firm’s contract as the operator of a one-stop centre in China and the VLN system as well as to maintain a contract for the supply of the VLN integrated system.

He was also charged with seven other counts of obtaining for himself S$1.15 million, RM3 million, 15,000 Swiss francs and US$15,000 from the same company in connection with his official duties.

The offences were alleged to have been committed at Seri Satria in Precinct 16, Putrajaya, and at Country Heights, Kajang, between October 2014 and March 2018.

Zahid still faces 35 charges in the Kuala Lumpur High Court for money laundering and criminal breach of trust involving millions from Yayasan Akalbudi and for accepting bribes for various projects during his tenure as the home minister.

Further, a ledger which purportedly listed payment to ministers, politicians and civil servants did not support the evidence of the trio.

“The prosecution could not establish a prima facie case as the three were not credible and (were) unreliable,” he said.

Yazid said Tan claimed to have paid RM3 million to Zahid but this was not mentioned in his witness statement.

“During cross-examination, he agreed that the payment was an afterthought,” he said.

The judge said Tan also did not offer any explanation as to why different code names were attributed to Zahid in the ledger.

Tan had prepared the ledger using Microsoft Excel sheets on his laptop computer.

In the ledger, he used code names for Zahid, such as Monster, Mon, YB, Young Boy, ZH and Z.

Yazid said Lee was also not able to state with certainty that the money he took from Tan was given to Zahid based on remarks in the ledger.

He said the ledger also did not support the oral evidence of Wan Quoris.

The judge also criticised the prosecution for not calling a person identified as Nicole Tan, whose name appeared in almost every page of the ledger.

He also dismissed the defence’s contention that Zahid was subjected to an unfair trial.

“In fact, the accused was represented by an able defence team led by senior criminal lawyer Hisyam Teh Poh Teik,” he said, adding that the attorney-general had the discretion as to who he wanted to charge.

Yazid also did not accept the defence of political donation advanced by Zahid’s lawyer.

“It must be shown that such donations were spent purely on political activities,” he said.