Syed Saddiq pointed out inconsistencies of promise to provide 150,000 laptops to students which turned out to be a lending scheme 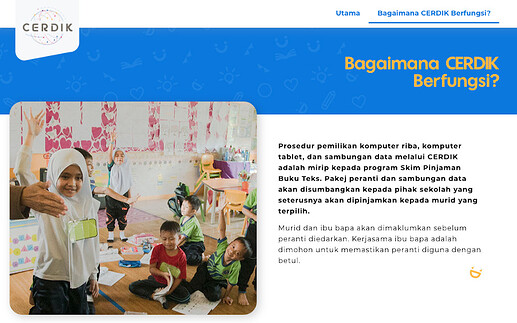 Syed Saddiq pointed out the inconsistencies of the current government’s promise to provide 150,000 laptops to students through the initiative, pointing out that it is now a lending scheme similarly used for school textbooks instead.

“First you say you want to give 150,000 laptops to students. Now it’s like a textbook loan scheme.

“So once you’ve used the laptop, you have to give it back? If it is faulty, the student has to replace it? Why didn’t mention this while presenting it during Budget 2021?” he asked.

On the frequently asked questions (FAQ) on Cerdik Initiative’s website, the foundation said that the laptops or iPad tablets being loaned out under the programme belong to the Ministry of Education, and a fine of RM300 will be imposed if the laptop is lost or damaged.

It also said that the programme will be akin to the textbook loan scheme, and the devices and data connection will be contributed to each schools to determine eligible students.

It will also provide just 15GB data per month for 12 months, and any additional data must be paid for by each student.

The Cerdik initiative was slated to provide digital access comprising laptops, tablets, and data connectivity to the students beginning this month.

Syed Saddiq had recently held a fundraiser in order to provide needy students in his constituency with affordable laptops to be used for online learning.

Does this indicate that we cannot trust government’s promise?