Syabu and Ecstasy with value RM743,400 Seized and Seven People Arrested by Police 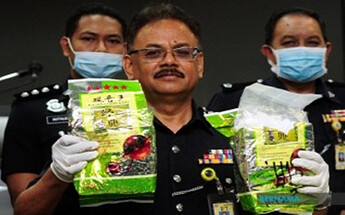 Police arrested seven individuals including a teenager and seized 14.33 kilogrammes (kg) of syabu and 537 ecstasy pills worth RM743,400 in five separate raids on Wednesday and yesterday.

Selangor Narcotics Crime Investigation Department (NCID) chief ACP R. Sundralingam said the raids were made based on public tip offs and intelligence from the Serdang NCID assisted by the state NCID.

He said two men were detained at a two-storey terrace house in the first raid in Bandar Kinrara, Puchong on Wednesday at 10 pm and found 120.9 grammes of syabu with them.

It is a serious case that happens in Puchong. Finally, police can arrest them and seize those syabu and ecstasy that harm people. This news is to let more people know this type of serious case is happening around Puchong and let it alert more people to take attention and stay away from drug or someone want to harm you by using the drug.