SUKE signboard was taken down after backlash on social media 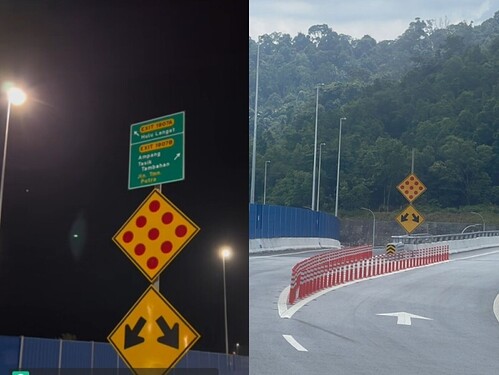 KUALA LUMPUR, Sept 21 — The first phase of the Sungai Besi-Ulu Kelang Elevated Expressway (SUKE) has opened to the public in an effort to minimise traffic congestion in Klang Valley.

However, the company managing the 24.4-kilometre expressway has come under fire following videos by highway users complaining about its tiny exit signboard near the Hulu Langat and Ampang intersection.

In the videos, users can be heard grumbling on how it’s difficult for them to read signboard while pointing out the danger it could pose to other road users.

An expressway spokesperson told Malay Mail that they have since been notified about the issue and confirmed that it has been removed by their patrol team.

“Our corporate communications team has taken note of the incident. We have already sent a team to inspect the area.

“From the latest info we’ve gathered, our patrol team has removed the signboard.

“Most probably it (the signboard) will be modified or replaced with a new one,” he said, adding that more updates will be shared soon.

Following the circulating video which was initially shared on TikTok by users bob_yp and jeppwaksalam, local social media users were seen riled up online while also poking fun at the ‘small’ mishap.

“The highway cost millions of Ringgit but the signboard is so small,” tweeted user zafranmustafa.

“Was it not checked by the consultant during its handover?” Facebook user Ben Azri commented.

“The signboard is not for all of you, it’s for the birds,” joked Facebook user Shahizwan Maamor.

SUKE is a three-lane, dual-carriageway running from Sri Petaling to Ulu Kelang featuring 14 interchanges, reaching out to over 60 residential areas.

It also connects to major highways and roads in KL.

The first phase of SUKE covers only 16.6km, which is from the Cheras-Kajang Interchange to Bukit Antarabangsa, and opened to the public September 16.

The expressway operators also announced a one-month toll-free ride which involves the toll plazas of Bukit Teratai and Ampang as well as 11 interchanges in conjunction with its launch.

Previously, the expressway made headlines after recording its first traffic accident just two days after being opened to the public.

The accident involved a motorcyclist and a car whose driver had stopped on the emergency lane to snap pictures of the scenic surroundings.