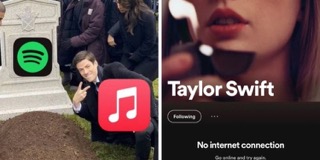 Was your Spotify down at about 12pm today in Malaysia? It might be because of Taylor Swift. Spotify users online have reported that the music platform was down for a while right after Taylor Swift released her anticipated studio album Midnights .

However, Twitter was filled with Spotify users who wondered why the platform was down. Many speculated that it could be because of Taylor Swift’s album release around the same time.