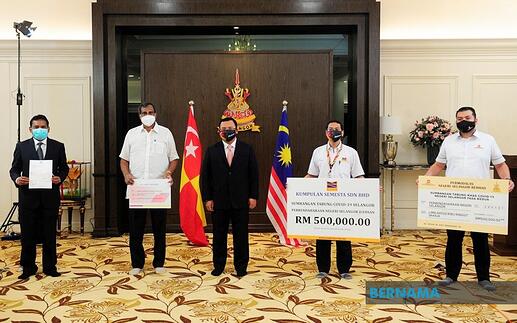 SHAH ALAM, Jan 20 – The Selangor state government today announced the ‘Pakej Kita Selangor’ initiative, involving an allocation of RM73.87 million to help those affected by the second round of the Movement Control Order (MCO) which was enforced on Jan 13.

Menteri Besar Datuk Seri Amirudin Shari said through the assistance package, a total of RM6 million has been allocated for its free mass targeted COVID-19 screening programme which would benefit 50,000 people in the state.

The targeted screening programme would focus on high-risk groups such as senior citizens, especially those at old folks’ homes and haemodialysis centres, as well as the B40 group and Selangor-born graduates, he said when announcing the special package here today.

Through the package, he said the state government has also allocated RM3 million to continue providing lunch and dinner to 13,322 frontliners, comprising healthcare workers, police and army personnel.

Amirudin said in order to reduce the burden of the Health Ministry, the state government would deploy its Bas Smart Selangor to help transport COVID-19 patients to the COVID-19 Quarantine and Low-Risk Treatment Centre (PKRC) at the Malaysia Agro Exposition Park (MAEPS) in Serdang.

He said under the Mesra Rakyat programme, RM100,000 each would be channelled to all 56 state constituencies in Selangor, while members of Parliament from the state would each receive RM50,000.

Amirudin said the allocation was to enable the elected representatives to provide basic essentials to those affected by COVID-19 in their respective constituencies.

“The state government has also agreed to provide rental exemption for this month and rental deferment for February and March for all People’s Housing Project (PPR), council home and Smart Sewa Scheme residents, which will involve a total cost of RM1.7 million.

“A three-month rental deferment from this month will also be given to tenants of 450 units under the same housing scheme, involving a total amount of RM1 million,” he added.

Amirudin said the state government has also decided to write off loans given to 762 Yayasan Selangor borrowers, involving a total of RM7.177 million in financial implication.

“A total of RM2 million has been set aside to provide assistance to 10,160 farmers in Selangor which includes vouchers to purchase petrol, poultry feed and farming input as well as the distribution of food baskets.

“The state government will also implement the Cakna Anak Barisan Hadapan initiative, costing RM1 million through the opening of temporary childcare centres at public hospitals and temporary premises to look after the children of frontliners,” he said.

Amirudin said the state government has also allocated RM300,000 for the state education portal ePTRS.my and the implementation of online interactive learning sessions and tuition classes for Sijil Pelajaran Malaysia candidates in the state.

Meanwhile, Amirudin said the state government would also channelled flood relief contributions amounting to RM1 million to Pahang, and RM500,000 each to Kelantan and Terengganu.

What difficulty did you faced during this second MCO?