Security guard get into woman house waiting! CCTV saved her 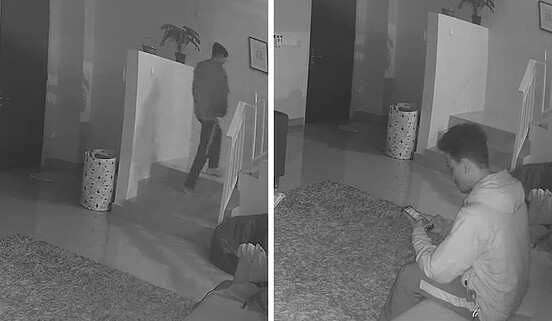 A woman in Johor recently went through a surprising ordeal when she caught a stranger in her house via CCTV.

Around 12.14 am on Thursday, 10th February 2022, the woman was on her way back home after dinner when she suddenly noticed a notification from her CCTV app saying “motion detected”. Then she opened and watched the live CCTV, shocked to see a man in her house apparently wearing a security guard uniform.

She then recognized that it was her housing area’s security guard, wandering around her house while charging his phone. He also removed his outer jacket and trousers while apparently waiting for the woman to come home in the living room.

He contacted the woman via WhatsApp asking her about her whereabouts by calling and also messaging. She noticed that the guard’s intention was not to steal anything in the house as he didn’t rob anything but rather to wait for her with bad intentions.

She further stated that her house was indeed locked but somehow he managed to get in. She was so shocked and grateful that she and her kids were not in the house at the time as something bad could have happened.

She called her sister and brother in law to check her house because they live just in the vicinity of her house. Just as her brother in law made it to her house, the guard left her house and accidentally left his security guard uniform in the house.

She lodged a police report and the next day, the culprit was caught by Johor PDRM. The police told her that the guy was involved with drugs and her case is still ongoing.

She was grateful for her and her kids were not harmed in this situation and advised others to always be extra careful and don’t trust others easily as we don’t know who might have bad intentions for us. She also said that her decision to put up the CCTV was purely to supervise her kids and did not expect that it would become handy in this sort of situation.

It’s so scary if you back home and someone you does not know waiting for you. Girls or women please learn to protect yourself if you’re staying alone.