Qin Xinjing: After the halo of an anti-epidemic star fades 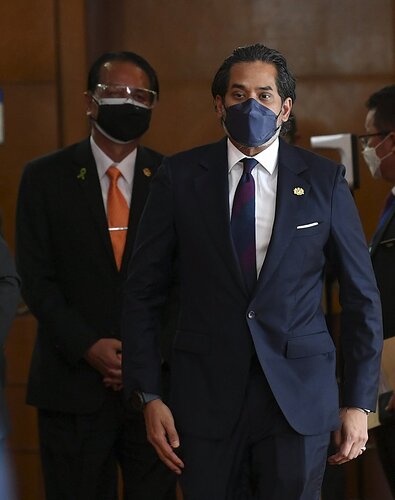 In the early days of the new crown outbreak last year, Health Director Nokhishan weathered the storm and was in front of the media almost every day to update the people on the progress of the epidemic. The public was impressed by Nokhishan’s ability to professionally and instantly answer all kinds of questions from the media, and he quickly became a household name in the fight against the epidemic.

At that time, Nohithan was the most exposed figure in the country and there was a popular saying that “China has Zhong Nanshan, Malaysia has Nohithan” to praise Nohithan. The real Minister of Health, Ahmad Abar Bah, was left out of the picture.

It is no coincidence that Nohithan rose to fame in a short period of time. The New Champions epidemic broke out almost immediately after the Sheraton coup, and after most of the people were disappointed by the political situation and frightened by the epidemic, they needed a calm and moderate style like Nohithan’s to lead the country out of the predicament.

Secondly, the post of health director was originally filled by a civil servant with no political party background, but then Prime Minister Muhyiddin put Nohithan at the forefront of the fight against the epidemic and gave him the responsibility of the health minister. Mulyodin may have had his own political considerations, but intentionally or unintentionally, he allowed Noshirama to gain the unreserved support of all parties.

Thirdly, the then Minister of Health was so incompetent that the public had to put their expectations on Noshirama to fight the epidemic.

There was nothing wrong with the praise he received for his good performance at the beginning of the epidemic, but what followed was an overwhelming campaign to create a god.

Some people in the Chinese community began to sing the praises of the Chinese ancestry of Nokhishan; Chinese media began to affectionately call Nokhishan “Shan”; many places in the country have sprung up Nokhishan’s mural; even Nokhishan’s family photos were also dug up by some media to praise, such as the whole family are handsome and beautiful, so on and so forth.

The most dramatic thing is that an animation company has launched an animation to portray Noshiyama as a superhero, teaching children how to defeat the virus on social media. These people seem to forget that the Ministry of Health has countless health care workers on the front lines fighting for the epidemic.

Myths are always shattered, especially after the second wave of the outbreak that started after Sabah’s elections last September and continued until the full-blown outbreak earlier this year.

The epidemic was out of control and had its own external causes that were difficult to grasp, such as the emergence of a variant virus. But Nokhishan himself, must also be held responsible for the frequent misjudgments, such as the announcement at the end of last year that the quarantine days for foreign returnees were shortened from 14 to 10 days, which opened a gap for the variant virus to enter Malaysia; for example, giving the green light for the Ministry of Education to announce the opening of schools early this year, which eventually led to the spread of infection clusters in schools.

It has also begun to emerge that Nohithan is not politically neutral either, as he has repeatedly defended the emergency warrants issued by Mulyuddin; when Mulyuddin lost the majority support in the National Assembly, Nohithan also ignored the damage to our democratic system and advocated the extension of the National Assembly session. The last glimmer of Noshirama’s star halo faded in the last months of the Muyudin regime.

When the Ishmael Shabbiri government came to power, Noshir San remained in office, but all leadership in the fight against the epidemic had been transferred to the new health minister, Khairy.

One of the best decisions of Shabbir’s premiership was to transfer Khairy to the health portfolio, because Khairy’s previous performance in charge of vaccines was unimpeachable. But today, I am always anxious when someone tries to tout how good Kerry is.