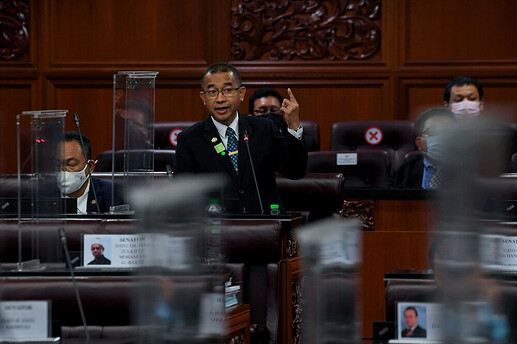 KUALA LUMPUR, Oct 25 — The high number of Covid-19 cases in Melaka is cited as one of the reasons for the political campaign ban by the Health Ministry, Deputy Health Minister I Datuk Noor Azmi Ghazali said today while denying any ulterior motives for the move.

Noor Azmi said the government has learnt from Sabah state election last year when the Covid-19 cases spiked tenfold after the state election in the state yesterday all across the country as the high infectivity of Delta-variant ravaged the country necessitating a series of movement control orders (MCOs).

“The public health steps took into account the still high cases in Melaka, with 262 new cases on October 24, 2,651 active cases as well as more than 6,000 close contacts still under observation from the Ministry of Health.

“There is also a high risk as (Melaka) has high sporadic cases at 36 per cent,” he told Dewan Rakyat during his turn to answer during the debate to annul Emergency Ordinance today.

Melaka recorded the sixth-highest number of cases in the last two weeks among all states. Deaths from Covid-19 have increased by 12 per cent in the same period, just second to Negri Sembilan (180 per cent).

RSN Rayer (PH-Jelutong) interjected asking for a guarantee from Azmi and the government to ensure the government parties would not use their official events to campaign in Melaka.

His interjection however developed into a shouting match as both shouted at each other until it was stopped by deputy speaker Datuk Mohd Rashid Hasnon.

Previously, Nik Nazmi Nik Ahmad (PH-Setiawangsa) also asked the government to ensure the Opposition is given fair airtime on television to campaign as they are not allowed to “meet the voters”.

“If we look at Singapore during their recent election, they have guidelines for how to reach their voters with TV stations and media,” he said during the debate.

Earlier Mohamad Sabu (PH-Kota Raja) questioned the matter saying it is a strange order as Melaka is in phase four of the National Rehabilitation Plan.

Meanwhile, Steven Choong (Independent-Tebrau) instead welcomed the ban calling those who think otherwise are “selfish”.

“We in politics should always place the health of the rakyat as our main agenda.

“Unfortunately, [politicians] for their own benefit have triggered the Malacca state election at a time when it is not so appropriate for the normal rakyat out there,” he said during his turn to debate.

Yesterday, Health Minister Khairy Jamaluddin announced the ban on all political gatherings in the state from today to November 27 over Covid-19 concerns.

He added that while there will be standard operating procedures (SOP) for the state election, it will only take effect during the campaigning period from November 8.

I think it’s wise to ban the campaign now as Malaysia still in recovery stage. What do you think?