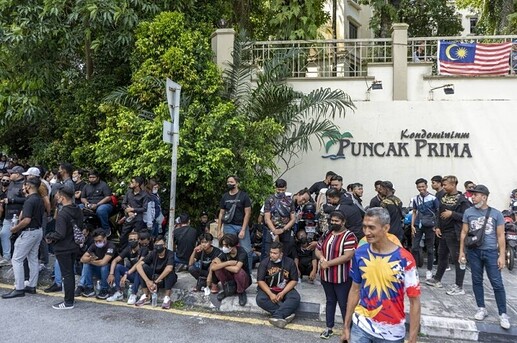 KUALA LUMPUR, Aug 25 — Petitioners who rallied a crowd outside Istana Negara yesterday to request a royal pardon for Datuk Seri Najib Razak can expect to be called by police for questioning soon.

Brickfields district police chief Assistant Commissioner Amihizam Abdul Shukor said the organiser had not given prior written notice for the gathering that drew 300 people to the palace gates.

“The police also call on the public not to gather or hold any assembly without valid permission,” he said in a statement today.

He also advised Malaysians to always be alert to actions or speech that may threaten public order in the country, especially in the capital city.
Public rallies are regulated by the Peaceful Assembly Act 2012, which requires organisers to provide a 10-day notice in advance to district police chief before the event.

Those found in violation of the law can be punished with a fine up to RM10,000 under Section 9(5) of the Peaceful Assembly Act.

Amihizam said the 2pm gathering outside Gate 3 of Istana Negara had drawn a crowd of 300 people, adding that they had been observed chanting slogans like Hidup Najib and Bossku.

He added that the gathering had been organised by a group calling itself Pertubuhan Jalinan Perpaduan Negara Malaysia.

The group’s president Syed Mohammad Imran Syed Abdul Aziz, who is also a member of Umno, had told reporters present yesterday that they were petitioning the Yang di-Pertuan Agong to grant a royal pardon for Najib.

“I would like to request for a full pardon to be given immediately to this person who has served honourably. His service and contributions have been torn apart in a humiliating way,” Syed Mohammad Imran said.

Article 42(1) of the Federal Constitution empowers the Agong to grant a pardon or reprieve to a convict, wiping clean any legal punishments to provide a “clean slate”.

Last Tuesday, Najib failed in his final appeal against the High Court’s guilty conviction in his SRC International case, which saw the Federal Court ordering him to serve his 12-year sentence with immediate effect. He was also fined RM210 million.