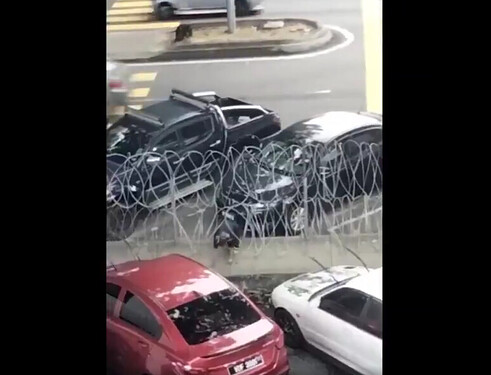 KUALA LUMPUR, July 10 ― Police are tracking down a woman suspected of sneaking into the enhanced movement control order (EMCO) area at the People’s Housing Project (PPR) near Taman Bukit Angkasa in Pantai Dalam.

Brickfields district police chief ACP Anuar Omar said they received a report on the incident after a video of the incident recorded by the public was shared on social media.

“The investigation found that the woman, wearing a dark shirt and white pants, was sneaking into the area to visit her grandmother.

“Efforts to track down the woman, believed to be living in Puchong, are underway,” he said in a statement today.

He said a public witness who uploaded the video on social media admitted to recording a 30-second clip of the incident yesterday afternoon.

The case is being investigated under Section 269 of the Penal Code for the offence of committing a negligent act likely to spread infection of any disease dangerous to life, which carries a six-month jail term or a fine, or both, upon conviction. ― Bernama

Everyone also wish to visit their parents especially Covid-19 period already last more than 1 year. But we need to know that they are high risk group. So we need to protect them.