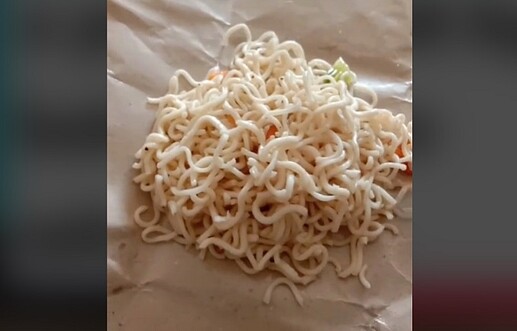 PETALING JAYA, March 3 ― The parent of a Standard One student couldn’t hide his horror of a noodle dish that was sold at his daughter’s primary school.

Like most parents who are particular about the nutrition their children get at school, Adam Azali was shocked when his daughter bought a packet of plain instant noodles that cost RM1.50.

The dissatisfied dad took to TikTok where he posted a short clip of the uninspiring instant noodles, asking followers if it was worth the RM1.50 price tag.

Adam wrote in his post that his seven-year-old child had initially thought the packet contained fried noodles but he was horrified to discover they were in fact, some very plain looking and soggy instant noodles.

The dad questions the price and quantity of the food that was sold at the primary school, saying the amount was too little and had no other ingredients for its cost.

The disappointed father said in his TikTok post that he would pack home-cooked meals for his daughter to bring to school after the incident.

TikTok users also chimed in after watching the clip, slamming the school’s canteen operators for selling instant noodles that have no nutritional value for children’s health.

A fellow parent also responded to his post, revealing his child once bought fried rice that had turned bad.

Others persuaded Adam to raise the concern to the school to deal with the matter.

In his latest clip that he posted this morning, Adam shared a clip of him making his child’s packed lunch that consisted of bread and a fried egg he cooked using olive oil.