People cards feature on Google, only available in India for now 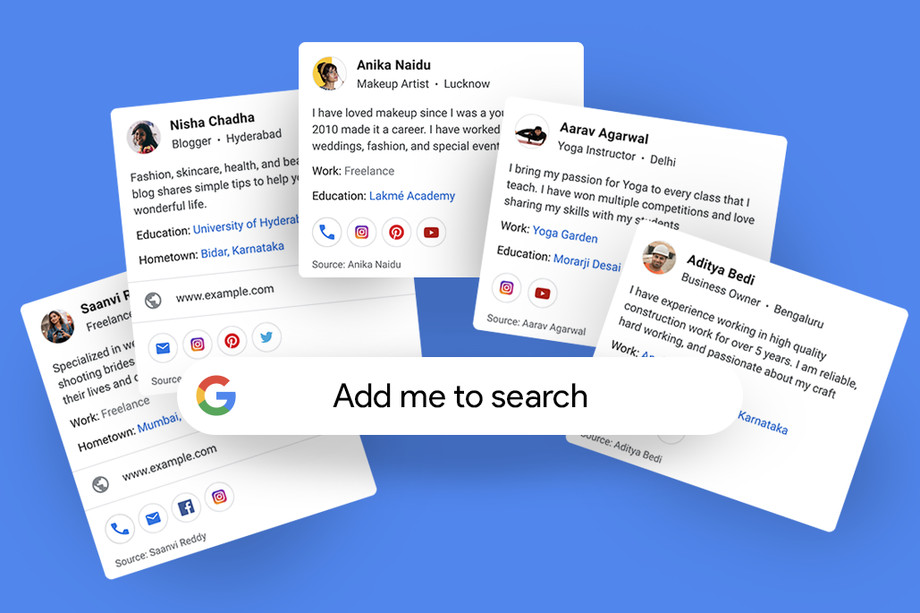 Google is testing a new user-created public profile system called “people cards,” which will let users create their own profile (including their job, links to their social media platforms, a brief bio, and more) that will appear directly in Google search results. It’s similar to how celebrities and businesses already appear. The new cards are only being tested in India in English to start.

How to set up people card

To set up a new people card, simply search the phrase “add me to search” while logged in to your Google account. From there, Google will bring you to a new page that lets you create the card. The only mandatory fields are name, occupation, location, and an “about” bio, although you can also add information on your education, hometown, links to your website and other social media, and even your email and phone number (should you feel comfortable posting those on a publicly accessible Google search).

Obviously, with a system that allows anyone to create a result that will show up in Google search for the hundreds of millions of customers who rely on the service every day, there’s a big potential for abuse here. It’s easy to imagine trolls or harassers creating fake cards that show up every time someone searches your name or uses your people card to give out sensitive information, like your address, email, or phone number.

To that end, Google says that it has a “number of mechanisms” to prevent spam and abuse of the people card system.

How Google prevent spam and abuse of this feature

Each Google account is only allowed to create a single people card and has to have authenticated their account with a phone number before they’ll be allowed to create the card. Google will let you flag cards with bad information or that you think were created by an imposter, and users will be able to delete or edit their cards whenever they’d like.

According to the Verge, Google search’s people cards are rolling out today in India; Google has yet to say if or when the feature will hit other regions.