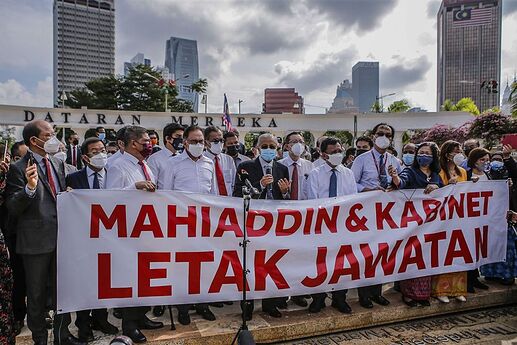 KUALA LUMPUR, Aug 2 — Opposition MPs at the Merdeka Square here criticised the federal government for its alleged cowardly act of cancelling the final day of the Dewan Rakyat’s five-day special sitting that was originally scheduled for today but which has been postponed indefinitely due to Covid-19 concerns.

Gathered at the iconic Merdeka Square before their symbolic march to the Parliament, key Opposition leaders — who were united in their call for Prime Minister Tan Sri Muhyiddin Yassin and his Cabinet to step down — took turns to briefly address the media.

Muda president Syed Saddiq Abdul Rahman, who was the second to speak, said the government was acting cowardly.

“What is clear, it is by far the most corrupt and morally bankrupt government in Malaysia’s history.

“They said youths cannot gather or protest in Dataran, have to use the proper democratic channels, but when MPs, people’s representatives elected by the people wish to voice out for the citizens in Parliament, they closed Parliament. If this is not a cowardly act, I don’t know what it is,” he said.

He also said the reason for Covid-19 risks in Parliament did not make sense as the Covid-positive rate of 0.9 per cent was lower when it was announced to be closed, as compared to the higher positive rate of 2.9 per cent when the Dewan Rakyat had its first day of sitting on Monday.

He also questioned why the Dewan Rakyat has to be closed when government MPs were last night allegedly able to gather at a government premise to sign statutory declarations to declare their support to the prime minister.

“If you don’t consider this a trample and an insult to Malaysian democracy, our Federal Constitution, and our institution of Parliament, I don’t know what it is,” he said, also urging Malaysians and all political parties to set aside their differences and fight for a brighter Malaysia together as failure to act today will haunt the country in the future.

Upko president Wilfred Madius Tangau spoke before Syed Saddiq’s speech, saying that Parliament sittings should not have been postponed and that MPs want to go to Parliament which is their workplace.

Pejuang president Datuk Seri Mukhriz Mahathir said his party wants to discuss in Parliament approaches that should be taken as the deadly Covid-19 pandemic continues to claim lives in Malaysia.

“But as we saw, the move to block us from being present in Parliament is none other than they being worried that the legitimacy of this government would be challenged.

“They are worried they will lose power, lucrative positions given to each minister and GLC chiefs. We demand our right as MPs to be allowed to meet in the Dewan Rakyat officially,” he said in his brief speech, adding that the government of the day has failed to handle the country’s crisis and should be changed immediately.

Warisan president Datuk Seri Shafie Apdal said today was a “black day” for Malaysia in terms of laws, arguing that the Proclamation of Emergency nationwide and Emergency Ordinances and the latest Emergency declaration which suspended Sarawak’s state election until next February should have been debated and voted on in Parliament.

He pointed out questions raised by MPs last week in the Dewan Rakyat that were initially promised to be answered today, but said today’s sitting was unfortunately cancelled due to Covid-19.

He stressed that it is Parliament that makes laws in the country, while the executive is responsible for executing them accordingly.

Baru Bian, a lawmaker from Sarawak’s PSB, also spoke of the “dark day” in the country’s history and urged for the current government to resign.

DAP secretary-general Lim Guan Eng pointed out that Malaysia is today freed from the Emergency (which ended August 1) but not yet free from Covid-19 or economic issues or a government that allegedly went against the Federal Constitution.

He said the MPs wanted to go to Parliament to discuss the citizens’ problems instead of to carry out a vote of no confidence against the government.

He then briefly chanted along with the crowd for Muhyiddin to step down, as well as the Hidup Rakyat and Daulat Tuanku slogans.

Before starting their march to the Dewan Rakyat, the MPs were seen holding up a banner saying: Mahiaddin & Kabinet letak jawatan. This alludes to Muhyiddin’s actual name, with the banner calling for Muhyiddin and the Cabinet to resign.

“In terms of the numbers of MPs, the Mahiaddin government has fallen, and I have information, there are other parties that presented lists that requested to exit from Perikatan Nasional.

“Therefore with the 107 (MPs) here, plus them, the government has already fallen,” he claimed, adding that MPs were gathered today as there was allegedly never before in history such a government which purportedly insulted the monarchy.

What’s your opinion regarding this issue?