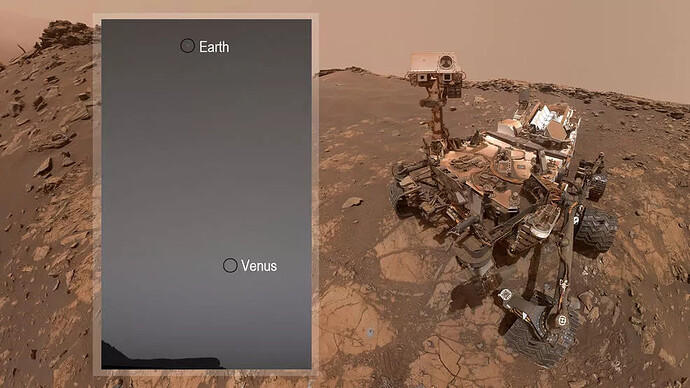 You don’t have to be human or even be on Earth to enjoy the wonders of the night sky. NASA’s Curiosity rover recently snapped a lovely panorama of its home planet and Venus from the surface of Mars.

The rover captured Earth and Venus on June 5 after sunset. “Both planets appear as mere pinpoints of light, owing to a combination of distance and dust in the air; they would normally look like very bright stars,” NASA said in a release on Monday.

The image from Curiosity’s Mast Camera combines two shots into one and also shows a silhouette of the top of Tower Butte, a landscape feature in the Gale Crater. If you want to test your eagle-eye vision, you can try to pick out the planets in an un-annotated version of the image.

Mars has entered into dust storm season. A global dust storm famously knocked out NASA’s long-lived Opportunity rover, which depended on sunlight to operate. Curiosity uses a nuclear power source, so it’s able to weather the dust better than its predecessor.

Curiosity is the only functioning rover on Mars at the moment, but NASA plans to launch the Perseverance rover in July. If all goes well, it will land on Mars in February 2021 and NASA will once again have two rovers investigating the geology and history of the red planet.