Najib asserts that in order to avoid injustice, the court must accept new evidence 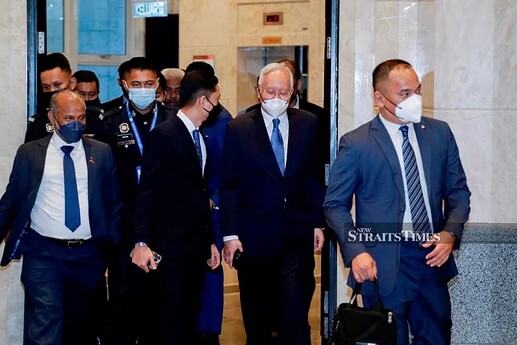 PUTRAJAYA: Datuk Seri Najib Razak’s final bid to clear his name over the SRC International case began today with his lawyer arguing that the Federal Court should allow him to introduce fresh evidence in his defence.

Senior counsel Hisyam Teh Poh Teik spent about two and a half hours submitting why the admission of this new evidence was necessary to prevent any miscarriage of justice.

His arguments were centred on the alleged conflict of interest involving trial judge Datuk Mohd Nazlan Mohd Ghazali’s especially on his failure to disclose his previous role as Maybank group general counsel and company secretary between 2006 and 2015.

He argued that facts like Maybank’s engagement as 1Malaysia Development Bhd (1MDB) strategic advisor were not supplied to the defence at the time of the trial.

Hisyam said his client was unaware of the judge’s involvement in the establishment of 1MDB subsidiary SRC International and the loans extended to the company by Maybank.

Najib has claimed that he was only alerted to Nazlan’s alleged conflict on May 9 and July 7 this year after he received several documents which were sent to him anonymously.

The prosecution, which is led by ad hoc Deputy Public Prosecutor Datuk V Sithamabaram, will be replying to Hisyam’s submission when the hearing resumes at 2pm.

The former prime minister was convicted by Nazlan on July 28, 2020 on seven charges of abuse of power and misappropriation of RM42 million of SRC International funds.

He was sentenced to 12 years jail and fined RM210 million and this was reaffirmed by the Court of Appeal on Dec 8 last year.

He is now making a final attempt to overturn the ruling against him at the Federal Court./