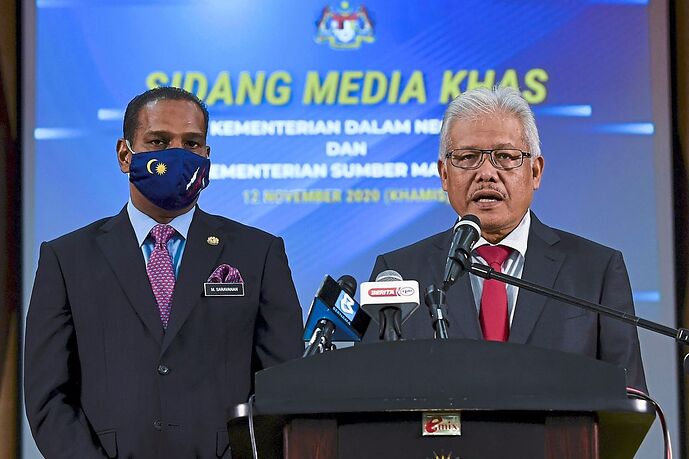 PUTRAJAYA: Employers in the construction, manufacturing, plantation and agriculture sectors will be allowed to legally employ undocumented foreign workers under the Labour Recalibration Plan for undocumented immigrants, the Home Minister announced.

Datuk Seri Hamzah Zainuddin said the government would also roll out the Repatriation Recalibration Plan where undocumented immigrants can volunteer to return to their homelands, subject to certain conditions.

The Labour Recalibration and Repatriation Recalibration plans are for employers and undocumented immigrants in Peninsular Malaysia.

will not threaten job opportunities for Malaysians.

“The opportunity for locals is guaranteed based on the local-foreign workers ratio policy that is in place. Priority is always given to locals to fill vacancies at workplaces in all economic sectors.

“The freeze on new intake of foreign workers in all sectors remains, to support the government’s policy to prioritise local workforce,” he said at a press conference.

Hamzah said for now, only employers in the four sectors whose operations are considered 3D – dangerous, difficult and dirty – would be allowed to employ undocumented immigrants as workers.

Undocumented immigrants and employers who wish to take part in either programmes are to deal directly with the Immigration Department and the Peninsular Malaysia Labour Department, he said, adding that no third party or vendor will be involved.

“The implementation of the plans does not involve additional operation costs to the government and it is handled fully by government agencies.

“In fact, the government is expected to make RM95mil from compounds and other payments that undocumented immigrants and employers will have to pay,” said Hamzah.

The minister said the two plans would allow authorities to collect data and demographics on undocumented immigrants in the country so that enforcement could be effective and holistic.

Hamzah said the Home and Human Resources ministries would engage with embassies and high commissions as well as industry players to inform employers and undocumented immigrants on what the two plans entailed.

He said a special committee, which he will co-chair with Saravanan, would meet every three months and also look into the possibility of expanding the recalibration plan for undocumented immigrants to other sectors, besides policy on employment of expatriates.

The first meeting is scheduled for Dec 3.

Hamzah said after the plans expired on June 30 next year, the Immigration Department would kick off its Undocumented Immigrants Holistic Enforcement Plan which would see mass enforcement activities.

Employers found guilty of hiring foreigners without valid permits will be given the maximum penalty of RM50,000 fine and jail up to 12 months or both for each undocumented immigrant employed, and those hiring more than five will also be given the rotan.