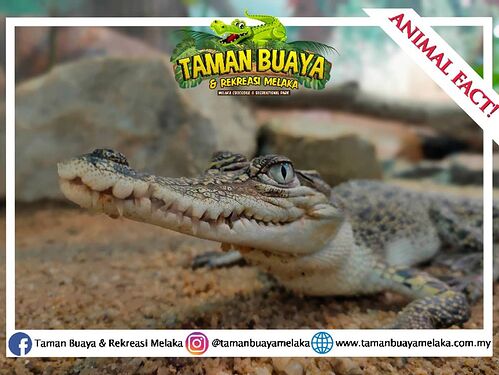 The Melaka Crocodile and Recreational Park (TBRM) which relies solely on tourists and visitors, had to use a whole new approach to ensure the survival of their animals and their park.

Park’s general manager Ahmad Syarifuddin Mohamad said TBRM launched their own online tours of the park as an initiative to keep the business going.

The initiative will take online viewers on an educational tour towards the park which is home to 100 crocodiles of various species, six species of snakes as well as mammals such as racoons and deers.

The tour will also include a crocodile feeding session as well.

“Our main objective is to survive during this pandemic season because the tourism industry is amongst the most affected.

“Even though we received monetary support both from the government and public, the reality is the cost for sustaining the park has overwhelmed the support and we had to find new initiatives to keep it going.

“We hope that the public can help us together in supporting these animal’s welfare by participating in our efforts,” Syarifuddin told Malay Mail.

Syarifuddin who has been with TBRM for seven years now also said that the idea for the online tour came to be after they had made a few online tours via Facebook Live since the first MCO last year.

“So, the first few Facebook live tours was us doing educational tours filled with facts on the animals and the behind the scenes of our animal’s caretakers.

“The viewer’s response was amazing, and we started to get requests from people to make more of the Facebook live session.

“That’s where it hit us, since we’ve already got the demand, why not try to do a paid online tour,” he said.

TBRM received tremendous support from the public as their online tour slots for this weekend have been fully booked despite it being launched just last Saturday.

The online tour will have two sessions a day, from Friday to Sunday only.

“For now, we’re limiting the online tour to 500 people per session, and we will have two sessions per day which are in the morning and in the evening.

Syarifuddin admits that the TBRM online tours come with its own set of challenges mainly involving internet line connectivity, with crashes or lags a common problem when it comes to video conferences.

He however assured that the TBRM side has a stable internet connection to do the live tours and suggested that viewers make sure they have a stable connection at home.

Syarifudin acknowledges that TBRM is taking a risk since they can’t really control how their live tours are being viewed and by how many people exactly, but it is a risk that they’re willing to take.

The sales from the TBRM live tours will be used to cover the expenses of the park which includes for the welfare of animals as well as their caretakers.

He said based on the registrations they have received so far, it is enough to cover the park’s expenses for another couple of months.

The TBRM live tour will be done via video conference application, Google Meet and for those interested in joining, you can do so by registering here.

More and more sectors need to think a way to earn money using online platform. So based on your opinion, how can cinema survive through pandemic? Share your ideas