Man yells at hospital staff for late rescue, tries to turn it into a racial issue 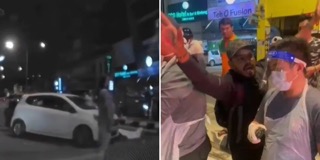 A car passenger died at the scene after being involved in a car accident that took place near Kuala Lumpur, around 5.50 am on Monday (22 August).

According to a report by Utusan, the 23-year-old woman driver lost control of her Perodua Axia before skidding and hitting the road curb.

Dang Wangi OCPD Asst Comm Noor Dellhan Yahaya said the police received a report regarding the incident at 6.50 am.

He added that the driver sustained injuries and was sent to the red zone in Hospital Kuala Lumpur to receive treatment.

However, the 30-year-old male passenger did not survive the crash. Noor Dellhan said the body was sent to the forensics unit for post-mortem.

Meanwhile, a Facebook post regarding the accident also went viral online. In a series of videos, it can be seen that a member of the public was shouting at the paramedics while they were checking on the passenger.

Apart from scolding them for being late to the scene, the man alleged that the delay was due to racial bias.

“Why are you late? We have been wait for over an hour! Notwithstanding race and religion, we should save people,” the man said.

In the comment section, netizens criticised the man for blaming the passenger’s death on the hospital and the speed of the ambulance.

Many also questioned if the man was trying to turn this accident into a racial issue.

At the same time, some netizens pointed out that the authorities had never asked about the race of the victim when it comes to emergencies.