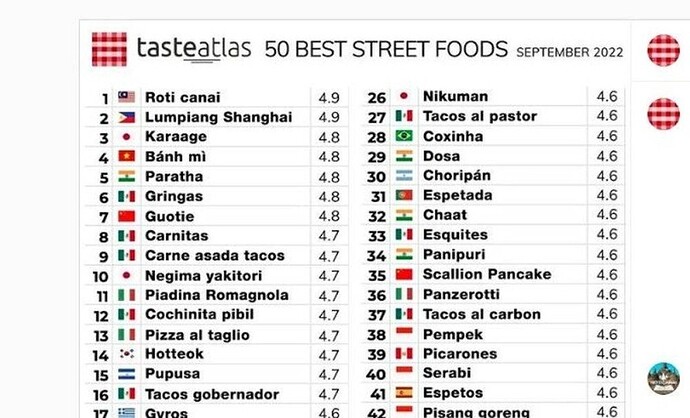 Shared on its Instagram two days ago, the Malaysian favourite however shared the same points of 4.9 with the Filipino-style spring roll Lumpiang Shanghai - made of minced meat.

Many Malaysians took the opportunity to joke about the roti canai including being ‘grateful’ that their favourite snack had topped the list.

"I guess it’s not a waste that I’ve been eating roti canai everyday to contribute to it being on the number one list,” a Malaysian user wrote.

The flatbread was a hot topic of debate among the Indonesians online with many coming up with outlandishly hilarious reasons to ‘claim’ that the flatbread belonged to their country.

“I’m from Indonesia and it is true that the roti originated from Pulau Jawa,” wrote on user.

"In fact there is archeological evidence in the shape of a roti canai that was found 10,000 years ago.

“Hence, roti canai belongs to us.”

Another trolled with his sharing that roti canai indeed belonged to Indonesia with the name of its founder Hendra Canaitiya.

The Malaysian flatbread is known to be crispy and flaky and is more commonly sold in 'mamak 'restaurants.