Malaysiakini get fined RM500,000 by Federal Court just because of five offensive comments 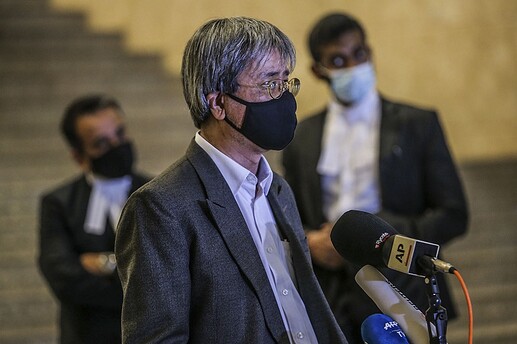 PUTRAJAYA, Feb 19 ― News portal Malaysiakini said today it will be holding a fundraising campaign to ensure it will be able to pay the RM500,000 fine imposed by the Federal Court for contempt of court over the hosting of five readers’ comments against the judiciary.

Malaysiakini’s editor-in-chief Steven Gan, who was found not guilty in contempt of court in the same case, expressed his disappointment on the Federal Court’s decision today for the “chilling effect” it would have on freedom of expression in Malaysia.

“We were very disappointed with the decision. The decision flies in the face of the fast-changing new media landscape in this country, will have tremendous chilling effect on discussions of issues of public interest and it delivers a body blow to our campaign, our continual campaign to fight corruption among others,” he told reporters when met at the lobby of the Palace of Justice.

Gan said the approach to be taken should be to educate Malaysians instead of “punish” media organisations like Malaysiakini for comments made by readers.

Gan noted that Malaysiakini had landed into trouble due to comments made by its readers on the prosecution’s dropping of charges against individuals who had been charged in high-profile cases.

The five offensive comments that Malaysiakini readers had made against the judiciary had included criticism against the courts over the acquittal of former Sabah chief minister Tan Sri Musa Aman of 46 corruption and money-laundering charges, despite the High Court’s acquittal of the politician actually being the result of the prosecution’s withdrawal of the charges.

“So some of our readers may have gone overboard in criticising the decisions, some of them may have attacked the wrong target. But I think in an environment where everyone has a megaphone, in an environment where we have a vibrant social media, it is imperative that we explain, we illuminate, we educate … instead of trying to punish media organisations like Malaysiakini,” Gan said.

“I think the decision that was made against us and the hefty fine that has been put against us. It’s really, really an attempt to perhaps not just punish us but also to shut us down.

“I’m terribly disappointed with what had happened and I think what crimes has Malaysiakini committed that is so horrendous that we have been forced to pay a hefty fine of half a million ringgit. When there are individuals who are being charged with money-laundering and abuse of power involving millions of ringgit, if not billions of ringgit, walk free. It is definitely unfair,” he said.

“It has a chilling effect on freedom of expression in Malaysia,” Gan later said of today’s decision by the Federal Court.

“It will affect not just Malaysiakini, the decision will place undue burden on not just media organisations, but tech companies and millions of social media users in Malaysia. In terms of Malaysiakini, we definitely have to look at how we are going to run our comments function,” he added.

Gan said he was prepared that there may have been a chance that he would have to go to prison today, but thanked his lawyers for ensuring that he did not have to be jailed. The Federal Court had decided that he was not liable for contempt of court. Contempt of court can be punished by fine or jail.

On the next course of action that Malaysiakini will take, Gan said: “We will be asking all of our supporters to help us, so there will be a donation campaign to help support us to raise the money that we need to pay for the fine.”

“We will do our very best to raise that money among our supporters. They had supported us in other cases before, and we hope they will do the same this time,” he later said.

Malaysiakini’s lead counsel Datuk Malik Imtiaz Sarwar confirmed that the RM500,000 fine would have to be paid by the close of business on Wednesday.

The five comments were posted under a June 9 news report titled “CJ orders all courts to be fully operational from July 1”, with Malaysiakini having previously said that it was alerted at 12.45pm on June 12 about these comments when police contacted them to notify about investigations regarding these comments.

In court documents, Malaysiakini previously said it was not aware of the five offensive comments previously as no readers had reported these comments and as the comments did not carry any of the “suspected words” that Malaysiakini’s filter could detect, further noting that the editorial team had immediately reviewed the comments upon being alerted by the police and removed the comments at 12.57pm the same day.

Malaysiakini CEO Premesh Chandran, who was also present in the courtroom when the Federal Court delivered its decision, expressed hope that the 21-year-old news portal’s readers will provide support and comment responsibly, while also appreciating them for their past support and as well as those who had participated in the comments section to give their views and discuss news reports.

“Malaysiakini will continue. We have had many setbacks in the past. This is not the end of Malaysiakini by far, we will stand our ground and we will make sure that we continue to report the news and views that matter, and do our job,” he told reporters.

About five hours after the Federal Court imposed the RM500,000 fine on Malaysiakini and after Gan, Premesh and Imtiaz spoke to the media, the news outlet announced that it had received donations exceeding the amount.

On Malaysiakini’s website, a tracker on the fundraising effort under the “Media Defence Fund” states that it had raised RM544,524 and achieved the targeted amount, while also stating that the donation campaign has been suspended.

When we wish to give opinion, we should always be careful of what we should and shouldn’t comment. You responsible for your own words.