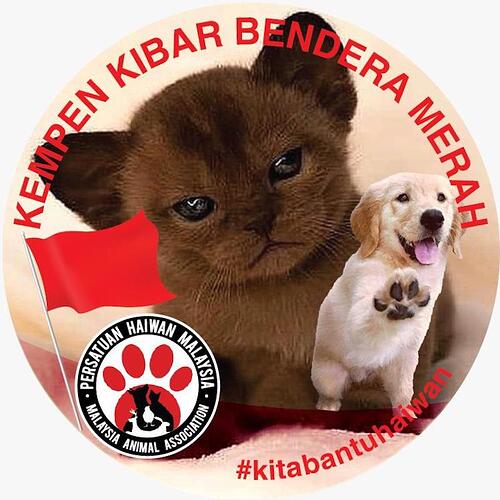 PETALING JAYA, July 1 — Malaysian pet owners struggling to buy food for their pets should reach out to their neighbours by raising a red flag outside their homes.

The red flag movement, launched yesterday by the Malaysia Animal Association, was inspired by the recent white flag project or #BenderaPutih movement in the country.

Its president Arie Dwi Andika told Malay Mail that since the first movement control order, there had been an increase in the number of pets being dumped on the streets due to their owners’ financial constraints or losing their jobs to the pandemic.

“White flags are raised by whoever is in need so that neighbours and the community will come to the rescue.

“But what about those who are struggling to look after their pets due to financial constraints caused by the multiple lockdowns?”

Arie added that while the organisation does not know how many pets have been dumped, its animal street feeders reported an increasing number of dogs and cats on the streets.

He said that it was a sad sight to see and not all pets released into the streets have been neutered.

“Most pets dumped are unable to cope with finding their own food so they end up dying of starvation while other animals get injured or die from road accidents.

“Last year, we partnered with a cat food company and sponsors to donate three tonnes of pet food to pet owners all over Malaysia last year during the first nationwide lockdown.

“But this time, we hope that neighbours and the community will help their neighbours who are grappling to feed their pets.

“The colour red was chosen as it was a friendly colour and a common colour used for pet collars.”

Arie added that since its launch last night, no one has raised a red flag outside their homes but the organisation has been receiving pet food requests for their cats.

He added that there was one cat owner who was desperate for cat food for 50 felines after his family members tested positive for Covid-19 and were unable to work.

“In total, we’ve received about 11 requests from members of the public since last night but we are not in a situation to donate money nor food as we are only a non-profit organisation.

“We just hope that Malaysians will not dismiss the red flags outside people’s homes and offer to help feed their pets,” he said.

I really can see the number of dogs on streets increase

Such a sad case