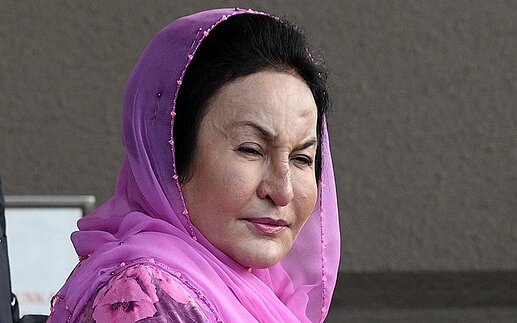 Geethan Ram Vincent, Reza Rahim and Rajivan Nambiar said that no such piece of jewellery was ever found to be in Rosmah’s possession, despite several raids carried out by the police following the fall of the Barisan Nasional government in 2018.

“At all material times, our client and her husband (Najib Razak) only knew that a UAE (United Arab Emirates) prince (Sheikh Mansour Zayed) had wanted to give a pink diamond necklace to her.

“She and her husband did not at any time demand, request or intend to purchase the pink diamond necklace,” the lawyers said in a statement today.

They added that Rosmah had no knowledge of the invoice produced and shown to the jury in the New York trial of former Goldman Sachs Group Inc banker Roger Ng on Wednesday.

Ng, the only Goldman banker to go to trial over the scandal, is accused of conspiring with his former boss, Tim Leissner, to help Jho Low siphon billions of dollars from a trio of bond deals the bank did for 1MDB.

The court heard that Jho Low contacted New York jeweller Lorraine Schwartz sometime in 2013 asking the latter to create a pink diamond necklace with a heart-shaped gem at its centre for Rosmah.

Schwartz was later said to have personally delivered the necklace to Rosmah while she was staying aboard a yacht with Jho Low off the coast of Monaco.

“In any event, our client takes the position that the production of the invoice per se does not amount to any form of conclusive evidence implicating our client in the purchase of the pink diamond necklace.

“She states that the sensationalising of this issue is another scurrilous attempt to defame our client and her husband politically,” the lawyers said.