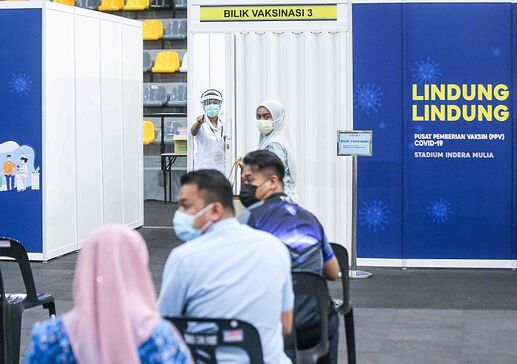 Commenting on Innovation, Science and Technology Minister Khairy Jamaluddin’s disclosure that up to 57 per cent of recipients under phase two of the national immunisation plan was not responding to appointment notifications, he said the present arrangement was both ineffective and inefficient.

The low response rate would slow Malaysia’s race to hit the 70 per cent vaccination target for herd immunity, Rajiv said when noting that this was time limited as the effectiveness period of current vaccines has not been fully determined.

“Rather than just register your interest, which is what’s happening now, Khairy must allow people to book in their specific time and date slot. It’s time to take this seriously if we want to achieve herd immunity as soon as possible!” he said in a statement.

Rajiv reiterated his call for more clarity and transparency in the vaccination process, saying arrangements could be made more efficient by communicating where vaccination venues will be and by allowing recipients to book the best dates and times for them.

The DAP lawmaker said his proposal did not require new or further investment as the government already has an existing system that could be adapted for the Covid-19 vaccination initiative.

“In fact, the Ministry of Health already has in place such an appointment system when it comes to making appointments to see a doctor or even just to collect medicine in our local Klinik Kesihatan as well as several private clinics via qmed.asia/booking.

“It is baffling that the government will not use readily available pieces of technology to smoothen the process,” he said.

The lawmaker argued that making it easier for Malaysians to obtain their vaccination appointments — to the point of making it “almost like buying movie tickets!” — would address the low response rate that the minister disclosed.

On Monday, Khairy reportedly said nearly six in 10 of the eligible recipients contacted for the second phase of the national immunisation programme either via the MySejahtera app or text message did not respond to confirm their appointments.

The coordinating minister for the programme said the failure to respond could lead to complications such as the spoilage of vaccines sent to the centres or insufficient doses prepared.

Malaysia is currently in phase one of the NIP for frontliners. Phase two vaccination for high-risk groups will begin next week.