PETALING JAYA, Dec 23 — KFC is making their official foray into the video game industry with the upcoming release of their KFConsole.

It’ll be hard to compare one of these with a PlayStation or Xbox as the KFConsole will come with a built-in “chicken chamber” for a finger-lickin’ good treat in between gaming sessions.

A teaser video posted on the official @kfcgaming Twitter account today promised a console that would bring “the next level in gaming innovation” and has garnered over 1.2 million views so far.

The fast-food franchise initially revealed the KFConsole in June but many brushed off the idea as a publicity stunt by the company.

But it appears as if the console might just be for real after KFC released the official specs for the system which is produced in partnership with Cooler Master, Intel, Asus and Seagate.

The KFConsole will let gamers enjoy their favourite titles in 4k resolution at 240 frames per second with Asus-powered graphics and an Intel Nuc 9 extreme compute element.

The console will also have the ability to load games in seconds and instantly access data with two Seagate BarraCuda 1TB solid-state drives.

To top it all off, the console is ready to run titles in virtual reality as well to give gamers the ultimate experience.

And of course, there’s the patented built-in “chicken chamber” which utilises heat generated by the system to keep fried chicken warm and crisp.

KFC has yet to announce a definitive price or release date for the console but the official Twitter account for Fall Guys stated that the popular video game will come to the KFConsole in 2022. 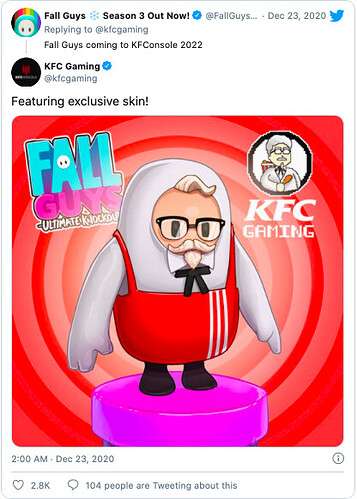 While many Twitter users remain confused over the legitimacy of the KFConsole, Intel’s public relations representative Mark Walton confirmed on Twitter that the KFConsole is indeed a real product.