Is your MySejahtera “MySJ Trace” showing zero interactions? Here’s how to fix it 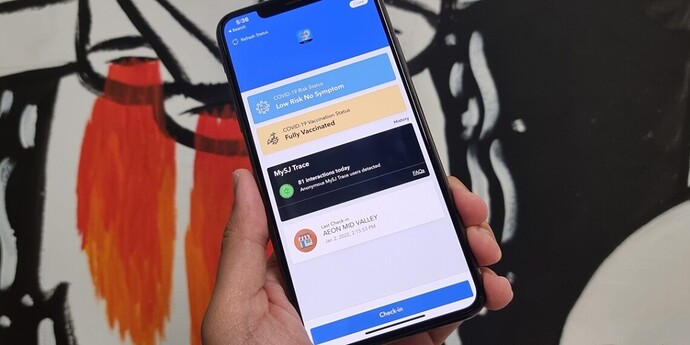 A few weeks ago, MySejahtera has introduced a new feature called MySJ Trace which uses Bluetoothfor contact tracing. If an individual is tested positive for COVID-19, this feature will help to identify individuals who have come into close proximity. Close contacts will be notified to monitor themselves and conduct self-testing. The feature has been rolled out to Android, iOS and Huawei devices, and it uses Bluetooth Low Energy (BLE), which uses minimal power compared to typical Bluetooth connections. In fact, various contact tracing apps in other countries including Google and Apple’s COVID-19 Exposure Notification are also utilising BLE. To turn it on, you would need to enable your phone’s Bluetooth feature, grant the app permission to use Bluetooth and enable push notifications. The MySJ app is working once it starts to show the number of interactions for the day. The interaction counter is essentially the number of MySJ Trace users (including low risk without symptoms) that have been detected around you and it doesn’t mean that you’re at risk if you get a higher number. The counter will reset each day and you can view the previous records by tapping on the “History” link.

According to MySejahtera, the feature can capture other MySJ Trace users within a 10-meter radius. The data collected is anonymous and is stored only on your phone for up to a maximum period of 14 days. According to the FAQ, if a MySJ Trace user is identified as COVID-19 positive, they will need to initiate a process to upload the interactions gathered over the past 14 days to a secured database managed by the Ministry of Health.

If you’ve activated MySJ Trace but still getting 0 interactions even after going out to public places, here’s how you can fix it. Firstly, make sure that you’ve installed the latest MySejahtera version and you can check manually via the Google Play Store, Apple AppStore and Huawei AppGallery. If you have not activated MySJ Trace, you can tap on it on the “MySJ Trace” check-in page and follow the steps provided. When it comes to the permission tab, click on “Allow” and your phone should show a prompt asking you to allow MySejahtera to use Bluetooth for nearby devices permission. Granting permissions for MySejahtera for Nearby devices

It appears that some Android phones are unable to pop up the permissions page from the MySejahtera app. We’ve experienced this on our Samsung Galaxy S21 Ultra running on the latest Android 12 operating system with One UI 4. To set grant the permissions manually, follow the steps below: Permissions for Bluetooth and Push Notification are on. MySJ Trace is working normally.

If you return back to the MySejahtera app, your Bluetooth status should be showing “On” as pictured above. If it works, you should see the interaction count increase when you’re within close proximity with other MySJ Trace users. If all else fails, it is advisable to uninstall and reinstall your MySejahtera app.

According to Health Minister Khairy Jamaluddin, 4,724,012 MySejahtera users have activated MySJ Trace. He added that 2,719 COVID-19 positive cases have uploaded their interactions which has helped to notify close contacts. Identified close contacts are urged to monitor themselves for symptoms and to conduct a COVID-19 self-test.

With the introduction of MySJ Trace, the app no longer requires you to check out when you leave the premises. This should narrow down close contacts more accurately which will reduce the likelihood of people getting flagged as “Casual Contact” by mistake.