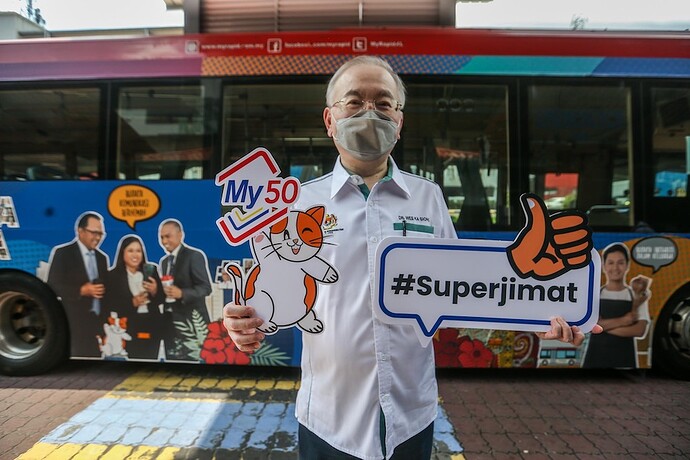 The RM50 pass, unveiled as part of Budget 2022, will effectively replace the My30 pass that was offered under the Covid-19 relief programme last year by January 1, 2022.

Minister of Transport Datuk Seri Wee Ka Siong said at the launch that the pass “proves the ruling coalition cares about public welfare, especially in these trying times in line with the aspirations of Keluarga Malaysia.”

“With the introduction of the My50 pass alongside the positive progress of the National Recovery Plan the government and Prasarana are confident that ridership of the public transport system operated by Prasarana will increase,” he said.

Prasarana Malaysia Berhad is a government-owned firm that operates the MRT, LRT and Rapid buses.

Ridership of Prasarana-operated services averaged at over 460,000 a day throughout 2021, more than half of the traffic seen prior to the coronavirus crisis that hit the country at the start of 2020.

The firm said Rapid services had seen ridership go over a million at its peak in 2019.

Wee said with the My50 pass expected to boost passenger traffic again, Prasarana has the capacity to increase the frequency of its rail and bus services to meet demand.

The same My50 pass will be called Mutiara in Penang and will be applicable for all Rapid bus services in the state.

The pass will only be available for Malaysian citizens, however.

Migrant workers, despite being lowly paid and are among the highest users of public transport, will not be eligible for the pass.

Wee said the programme, which he described as “a huge but crucial investment”, will cost the government RM115 million in subsidies.

Prasarana has yet to turn a profit since its inception because of low ridership of its public transport system, which has been criticised as inefficient and poorly planned.

“As stated by the prime minister at the launch of the Keluarga Malaysia Pass on November 22, public transport will play an integral role in realising the aspirations of Keluarga Malaysia with the long-term vision of healing the country,” Wee said.

My50 is RM50 unlimited travel pass for 30 days, you can use it on Rapid KL bus and MRT feeder bus but exclude BRT