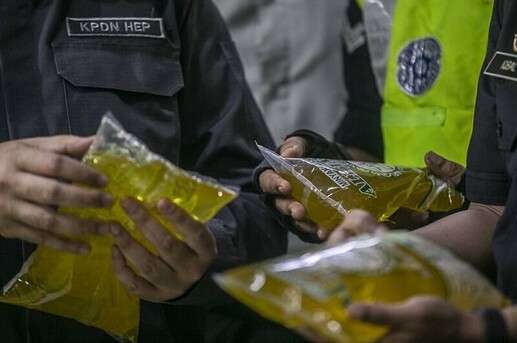 KUALA LUMPUR, July 25 — The government has banned the export of cooking oil in polybags to streamline enforcement against smuggling of the subsidised food item, said Tan Sri Annuar Musa.

The chairman of Jihad task force to tackle inflation said the government has consequently directed cooking oil manufacturers to only export in bottled form.

“When there is an exporter of cooking oil in a similar form, it creates problems for the enforcement officers, so any export of cooking oil in the form of polybags is no longer allowed,” he told a press conference after the task force’s meeting in Parliament today.

The government has maintained the price subsidy for cooking oil sold in 1kg polybags while removing this for oil sold in bottles ranging from 2kg to 5kg.

Today, Annuar said the government will reintroduce a price ceiling for the bottled palm cooking oil as manufacturers have not lowered their retail prices despite a decline in crude palm oil prices.

“It’s been two weeks since the committee gave a period to see the price of bottled palm oil lowered, it seems that the existing mechanism is not effective, the steps to negotiate and ask for a price reduction do not seem to be effective and the government needs to make effective decisions to protect the interests of the public.

“This will be done with certain details by the Ministry of Domestic Trade and Consumer Affairs and set a date when it will be gazetted,” he said.

Annuar added that the process will take about one week.

Is it a burden for you to buy cooking oil now?