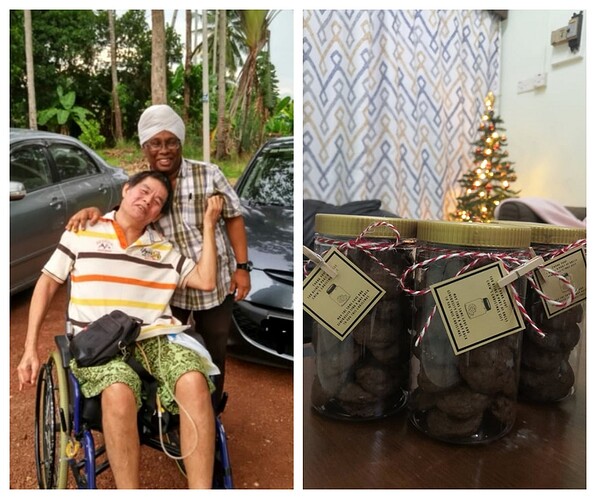 The 25-year-old managed the fundraising through selling her cookies and a crowdfunding initiative that she initiated on Twitter.

The 25-year-old told Malay Mail the paralysed man was her father’s classmate back when they were in school, fondly known as Uncle Chew who lives in Malacca.

“According to my father, Uncle Chew, 61, was involved in a freak accident about 10 years ago that resulted in his lower half of the body being paralysed.

“The accident made him lose his job as he was unable to work because of his condition and it was his brother and a few friends that took care of his financial needs for the past ten years since the accident.

“But things took a downward turn when Uncle Chew’s brother lost his job this year — and life has been hard for Uncle Chew as there are days where he wouldn’t have enough to eat due to the financial constraints.”

Hilda Paviter, a second-year fellow with Teach for Malaysia, jumped on the idea of selling cookies to support Uncle Chew after her mother suggested the idea to her.

These are infographics that I have created in order to make it easier to share. Please feel free to use them and to get the word out there.

Let this be a special Christmas for Uncle Chew ❤️🎄 pic.twitter.com/LnzWkhPq1Q

The money from the fundraising will be used to purchase mattress, wheelchair, catheter and other basic necessities such as food and rent to help him with his finances.

Having learned the art of baking since young, Hilda Paviter said the chocolate chip cookies remind her of home and the spirit of giving during Christmas.

“I started baking last Saturday and have received orders for 100 bottles of chocolate chip cookies from family and friends where one bottle of cookies is sold at RM30.

“Along the way, something good happened where a company called to sponsor the wheelchair while another woman called saying that she wanted to sponsor a mattress for Uncle Chew.”

Hilda Paviter was delighted as she never expected people to help after reading her post on Twitter.

“I didn’t think that my Twitter post would blow up — as I had only targeted to collect RM10,000. but what I’ve received from everyone is far beyond the targeted amount.”

She said that the funds received would be given to Uncle Chew’s friends to help him sort his finances so that he would be able to eat well and have his basic needs sorted.

“Uncle Chew has always been the type of person who has never complained about his difficulties — but this crowdfunding initiative has always been something that I wanted to do to help him.

“Since Christmas is around the corner, the funds received is a good gift for him as it will definitely cheer him up by helping him ease his financial burden,” she said.

Is it possible for everyone to bring warmth to the less fortunate before Christmas?