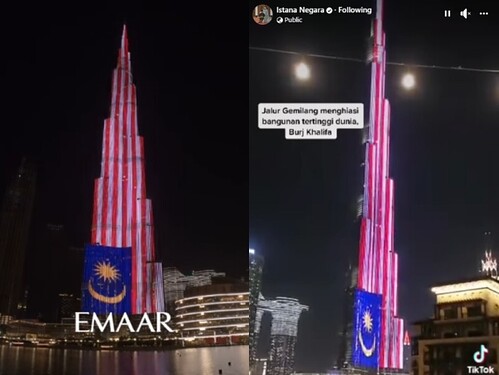 A 49-second clip was shared on official Burj Khalifa’s Facebook page showing the ‘Jalur Gemilang’ projected on the skyscraper.

“Tonight, we light up #BurjKhalifa in celebration of Malaysia’s National Day, wishing them further growth and stability.”

A similar clip was also shared on the official Istana Negara’s social media pages including their TikTok, Facebook and Instagram page.

It also stated in the post that the Negaraku anthem was also played in the background during the light projection show.

On Istana Negara’s TikTok, the 15-seconds clip has been viewed over 200,000 times with over 700 comments from proud Malaysians.

“Proud to be Malaysian,” commented _athirahj.

Located in Dubai, United Arab Emirates, the 828 metres Burj Khalifa by Emaar is the current tallest skyscraper in the world.