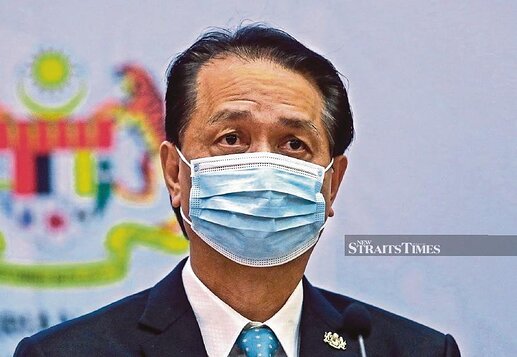 In a statement today, Health director-general Tan Sri Dr Noor Hisham said the AY.4.2, which is also known as the Delta Plus variant, was detected from two Malaysian students who returned from the United Kingdom (UK) on Oct 2.

"The two Malaysians arrived at the Kuala Lumpur International Airport (KLIA) on Oct 2 and their first RT-PCR results were negative.

"However, their second test taken on Oct 7 during the quarantine period came back positive.

“Results of the full genome sequencing conducted by UKM Medical Molecular Biology Institute (UMBI-UKM) was released on Oct 30,” he said.

Dr Noor Hisham said the vaccines currently used were still effective against AY.4.2 variant and measures such as quarantine and testing could help to reduce the risk of transmission of this variant in Malaysia, particularly at international entry points.

He added that the Health Ministry would continue to monitor and to find out whether the Delta sub-variant has been spread in the community.

As of end of October, AY.4.2 variant, made up 10 per cent of full genome sequencing conducted in the UK.

The UK Health Security Agency has classified AY.4.2 variant, that has two additional genetic mutations, Y145H and A222V, as Variant Under Investigation (VUI) on Oct 20.

Meanwhile, he said, as of today, another 90 Delta cases were detected, 44 by the Institute for Medical Research (IMR) and 46 by the UMBI-UKM.

The majority of the cases were reported in Johor and Sabah. Both the states reported 27 cases, followed by Negri Sembilan and Selangor (10 each), Kuala Lumpur (nine), Pahang (four), Kelantan, Melaka and Perlis (one each).

The two AY.4.2 cases were detected in Negeri Sembilan.

He said this has brought the total of Variant of Concern (VOC) and Variant of Interest (VOI) cases to 3,782.