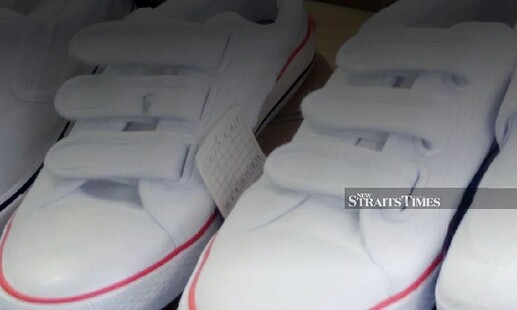 GEORGE TOWN: The father of a 13-year-old student who lodged a police report against a senior teacher for allegedly punishing her for wearing velcro strap shoes to school has vowed to fight for justice for his daughter.

R. Mogan, 38, who came to the defence of his daughter, said there was no reason for the Form One student to make up stories about the incident.

"Unfortunately, she is being made out to look like one. I suspect there is some ‘cover up’ somewhere along the way.

“I will go all out to fight for her. I am contemplating legal action against the teacher and the school. I have discussed this with my lawyer,” he told the New Straits Times when contacted today.

On Tuesday, the student had lodged a police report against the senior teacher for allegedly punishing her for wearing velcro strap shoes to school.

She alleged that she was told to kneel on the tarred road with her hands raised during the school assembly.

She claimed she had told the senior teacher that her family could not afford to buy another pair of shoes with laces.

She also alleged that after the assembly, the teacher called her and cut the holy string on her hand and asked her to wash off the “pottu” and “vibhuti” on her forehead.

The student claimed that she felt ashamed to go to school after the incident.

Yesterday, police confirmed that the teacher had lodged a counter-report, denying the schoolgirl’s claim.

Seberang Prai Utara police chief Assistant Commissioner Mohd Radzi Ahmad had said that police had recorded statements from several witnesses, including from Malay and non-Malay students and teachers, who claimed that they did not see the student kneeling during the assembly.

Responding to this, Mogan said it was impossible that no one saw the incident, adding that he had told police about a witness who saw the whole thing.

"The witness was never called. In fact, I was told that teachers and students at the school have been told to keep quiet about what had happened in school that day. Why?

"It hurts me to see my little girl traumatised over this incident. In fact, she is not talking to me as well.

“Indeed, I feel guilty as I was the reason she was transferred to this new school,” he said, adding that his daughter had since been transferred back to her old school in Padang Serai, Kedah.

Mogan had just got a job as an engineer here after he lost his previous job two years ago due to the Covid-19 pandemic. Prior to this, he was working as a Foodpanda rider.

"It’s true what my daughter said that I could not afford to buy her new school shoes with lace straps as I did not get my salary yet then.

"Also, is there anything wrong with wearing black velcro strap shoes to school? Is there any circular saying that such shoes are not allowed or is it a ruling set by certain people?

“I am still waiting to hear from the state Education Department and the district education office on this matter. If they were serious, they should have suspended the teacher pending an investigation. Instead, everybody is pinpointing blame at my girl,” he added.

He said his daughter had just been transferred to the school for three weeks and had nothing against the teacher, or anyone for the matter, to make up such a story.

"I believe everything my daughter told me. I stand by her. She is not crazy to be making up such a story.