Estimate 100,000 children subjected to sexual exploitation and abuse according to study 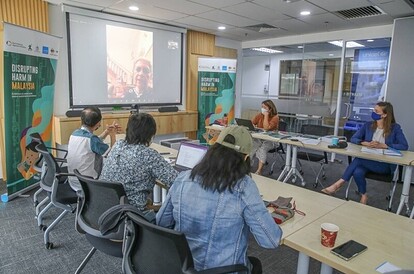 KUALA LUMPUR, Sept 29 — A recent global survey found that within the past year, at least 4 per cent of Malaysian children who use the internet have experienced online sexual exploitation and abuse (OCSEA).

"Scaled to the population, this represents an estimated 100,000 children who may have been subjected to any of these harms in the span of a single year,” said the report launched today.

Victims were most commonly girls aged between 13 and 15, the report said, citing data from the cases investigated by the police’s D11 division (Sexual, Women and Child Investigation).

In addition, 1 per cent of the children surveyed said they had been blackmailed.

A young survivor who was a victim of OCSEA shared their experience of how sexual blackmail could be weaponised to extort further sexual activity: "They said, ‘Don’t tell the family. If you do, I will come after you,’ so I was like, ‘OK, I won’t tell anyone’.”

Aside from sharing respondents’ experiences of OCSEA, the report also caught wind of troubling indications that child sex abuse materials were searched for on the open web in Malaysia.

"The possession, manufacture and distribution of child sex abuse material accounted for almost all of the National Center for Missing and Exploited Children (NCMEC) CyberTips for Malaysia between 2017 and 2019,” the report added, referencing the data obtained from the mandated reports of United States-based technology companies to the NCMEC and other partner organisations.

During a forum prior to the launch of the report, Datuk Dr Raj Abdul Karim, the chairperson of End Commercial Sexual Exploitation of Children (CSEC) Network Malaysia and End Child Prostitution in Asian Tourism (ECPAT) International drew a distinction between the terms "child sex abuse materials” and "child pornography”.

"The term ‘pornography’ implies a level of consent that children cannot give,” she said, explaining why the term "child sex abuse materials” is preferred.

Where does OCSEA mostly occur, and who are the most vulnerable?

Of the 38 children who had reported experiencing a form of OCSEA in the past year, 21 said the incidents had involved social media while seven pointed to online gaming.

The 21 who experienced OCSEA on social media reported that the platforms it mainly occurred on were WhatsApp, Facebook and Facebook Messenger.

The findings corroborated survey data published by the Malaysian Communications and Multimedia Commission which showed that WhatsApp was the most popular social media platform with 98.1 per cent of 27.8 million communication app users, followed by Facebook Messenger (55.6 per cent), WeChat (36.8 per cent) and Telegram (25 per cent).

Besides that, the results of the survey also indicated that boys were more likely to be targeted on a wider range of platforms compared to girls.

Of the six children who said they had shared naked pictures or videos of themselves online in the past year, two said they did so because they were flirting or having fun and one that they were in love.

"These are also the most common reasons cited by children in ‘Disrupting Harm’ countries in which sharing naked images or videos was more common,” said the report, referring to the seven Eastern and Southern African countries and five Southeast Asian countries other than Malaysia that the research project was conducted in.

Frontline workers were also surveyed on their perceptions of factors that make a child more vulnerable to OCSEA — with 98 per cent of them agreeing that dropping out of school was a significant factor.

What kind of person commits OCSEA?

Data from D11 showed that sexual gratification was the primary motivation for offenders, although there was one case in which financial gain was identified as the driving factor where a mother and her boyfriend forced a victim to be raped by two other men for money.

Law enforcement interviewees revealed that all the offenders in the OCSEA cases handled by D11 were close to the victims.

Most of the offenders were found to be men — with 27 offenders recorded between 2017 and 2019, compared to two female offenders.

"According to the law enforcement officials interviewed for ‘Disrupting Harm’, children in the cases investigated by the Malaysian police were approached and groomed by offenders offline.

"All victims in these cases were abused by either a parent or an adult guardian,” said the report.

As for the 38 children who reported experiencing OCSEA within the past year in the survey, 18 children said they did not know who the offender was while 10 reported not knowing the person before the incident.

However, a significant proportion of children did know their offender with six children saying the offender was a peer aged under 18, five victims identifying the person as an adult friend or acquaintance, and another five saying it was a family member.

A survey of 50 frontline workers who were asked about occurrences of OCSEA in the cases they had worked in the past year mostly identified the offenders as strangers, followed by parents/step-parents and community members under the age of 18.

"It should be added that 11 of the 38 children who had been subjected to these clear instances of OCSEA preferred not to say who the offender was.

"This reluctance to disclose could indicate that the person was known to them. It may be more difficult for children to disclose when offenders are individuals they are economically and/or emotionally dependent on,” said the report.

The report went on to clarify that there is an expected level of underreporting for the survey because of "privacy concerns, hesitation to discuss sex and sexuality, fear of stigma and possible fear of criminal liability (related in part to the age of consent, the age of criminal liability, the criminalisation of male homosexuality and the ban on pornography)”.

The US$7 million (RM32 million) study was funded by the Global Partnership to End Violence Against Children and was carried out through the partnership of civil group End Child Prostitution in Asian Tourism (ECPAT) International, the Interpol and United Nations’ Children’s Fund’s (Unicef) Office of Research.

In Malaysia, researchers interviewed 995 children aged between 12 and 17 who had used the internet in the three months prior, in addition to ten semi-structured interviews with 11 criminal justice professionals, a survey of 50 frontline service providers that included outreach youth workers, social workers, and health and legal professionals working with children’s cases, and interviews with 18 government officials.