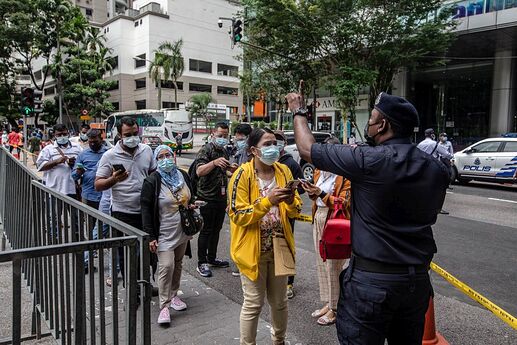 In a statement acknowledging the concerns raised by the public, CITF said the congestion raised through media reports took place due to a large number of vaccine recipients sent there by their employers without following the stipulated appointment time.

“Many showed up in the morning, whereas their appointments were in the evening.

“Besides that, the failure of migrant workers in filling up forms and downloading the MySejahtera app also contributed to the congestion as it was a time-consuming process where each of them required at least five minutes to do so, causing congestion at the registration counters,” it said, adding that although there were on-site translators, the process still took time.

Noting the urgency for immediate measures to be taken so that congestions leading to the spread of Covid-19 infections could be prevented, CITF said it sought the cooperation of the police to stop any buses transporting Malaysian citizens or migrant workers en masse from outside the Klang Valley to receive vaccinations.

“Moreover, CITF has also amended some of the appointment dates for eligible recipients to reduce the number of attendees so the congestion arising from communication issues could be prevented,” it said, adding that as a result, congestion at the vaccination centres were successfully reduced as of evening earlier.

It added that it was also considering the need to designate several vaccination centres for migrant workers according to language used so resources like interpreters or volunteers may be better utilised to smoothen the vaccination process.

Earlier today, migrant workers were observed congregating en masse at the Kuala Lumpur Convention Centre (KLCC) mega vaccination centre after they showed up hours ahead of their scheduled Covid-19 vaccination appointment during a Malay Mail observation.

Despite intervention from the authorities in enforcing crowd control measures, Malay Mailobserved that many were still forced to loiter in the surrounding areas before being shooed away and ordered to disperse by several police officers on duty.

This as videos and photos began circulating on social media depicting crowds of foreign workers queuing en masse without much physical distancing at the KLCC yesterday.

It is understood that the KLCC — designated as one of the mega vaccination centres by the Covid-19 Immunisation Task Force (CITF) — also doubled up as a facility under Public-Private Partnership Covid-19 Industry Immunisation Programme (Pikas).

The Pikas initiative is aimed at facilitating the government’s efforts to accelerate vaccination among the labour workforce, especially those from the manufacturing sector.

At around noon, the sizeable crowd gathered since morning had all but dispersed save a remaining few seen loitering around before being ordered to leave by police officers proactively enforcing crowd control measures to ensure physical distancing and compliance of standard operating procedure (SOP).

However, groups of migrant workers could still be occasionally seen disembarking in groups, only to be told to return later as it was not yet time for their appointment and were forced to wait some few metres away from the entrance.

A police commanding officer later told Malay Mail that roughly 40 personnel including those from the Traffic Investigation and Enforcement Department were deployed to maintain order at the entrance to the vaccination centre.

However, he noted that many of those present were sent way earlier than their stipulated appointment time — ranging between three and six hours than stated in their MySejahtera app — as most of these migrant workers formed part of a larger entourage dispatched by respective employers en masse to the vaccination centre.

“Today’s situation is much better but there are still many who arrived way earlier than scheduled after being dropped off by buses their employers chartered,” the officer said.

Among those who were unfortunate enough to arrive hours before their scheduled appointment and forced to wait were Indonesian duo Jufri Adi and Mohamad Andi Ramli who were expecting their first Covid-19 vaccine dose.

When approached by Malay Mail, the duo — clad in brightly-coloured vests worn by street cleaners — seemed unfazed by the crowd lining up in front of them.

Both said they were ferried by their employers to the location around 1pm and were told to get their vaccination before contacting the former for pick-up.

“4.30pm,” muttered Jufri softly when asked what time was his appointment, which was some three hours later.

To our shock, Mohamad Andi told us his appointment was a whopping six hours ahead scheduled at 7pm later today.

Asked about having to wait for such excruciating long hours, both Mohamad Andi and Jufri expressed acceptance of their current predicament like the various migrant workers awaiting their vaccination.

Further checks by Malay Mail also found that some of the migrant workers loitering around seemed lost after being ordered to return on a later date for their vaccination after turning up today following amendments to their appointment dates as noted in CITF’s announcement earlier.

In a subsequent response yesterday after photos and videos of the crowd went viral, authorities have advised employers to send their workers, especially foreign workers, for their Covid-19 vaccination according to the times given in their appointments to avoid crowding at the centre.

Issue of company workers to get their vaccination should arrange properly as we knows that workers especially in big company are many. If they all come at same date sure cause overcrowding issue at PPV.