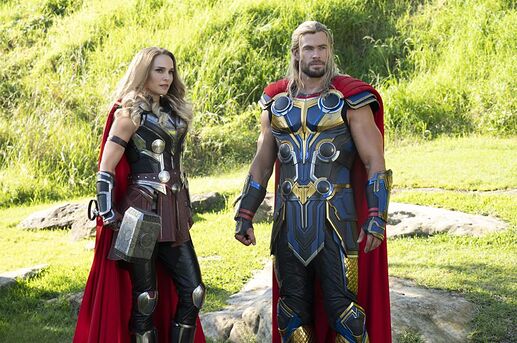 KUALA LUMPUR: Cinema operators in Malaysia are in the dark over the hold-up in the release of Thor: Love and Thunder in Malaysia.

They fear that delays could see hardcore fans resort to obtaining pirated copies of the film.

A Malaysian Association of Film Exhibitors (MAFE) spokesman today confirmed that the distributors, Walt Disney Company (Malaysia) Sdn Bhd, had told them that the movie would be “delayed indefinitely”.

MAFE chairman Koh Mei Lee said they had yet to engage the Film Censorship Board (LPF) because the distributors were Disney.

"We really have no idea. But, we too are seeking clarity from the board on why the film is being delayed as it is expected to be one of the biggest blockbusters this year.

“I hope that whatever the outcome, it is favourable for us,” she told the New Straits Times during a video interview today.

Speculation is rife that the delay is due to LPF’s objections to the LGBTQ themes in some scenes of the film.

China has also delayed the release of the movie, purportedly due to similar concerns.

Golden Screen Cinemas (GSC) posted on social media yesterday that release date for Thor: Love And Thunder was “TBA” (to be announced).

On July 1, The Walt Disney Company (M) Sdn Bhd said the release had been postponed to July 21.

Disney Malaysia confirmed the postponement but did not offer a reason for it.

Cinema operators who sold tickets in advance for the movie, which collected US$302 million during its opening last weekend, had been forced to issue refunds.

Koh, who is also GSC chief executive officer, said an “unfavourable outcome” regarding the movie’s release could push Malaysians to switch to piracy, which would result in economic losses to all.

TGV Cinemas chief executive officer Tan Lay Han said the delay was a damper to the industry that was just beginning to pick up after the dry days and forced closures during the Covid-19 pandemic.

"We (cinema operators) averaged about four million ticket sales for previous Marvel movies, such as the Avengers series and Doctor Strange in the Multiverse of Madness.

“This is the number of people who will not get to watch the movies and will not come to the malls to spend. Both sectors will be badly hit.”

In June, Disney scrapped the release of the animated feature Lightyear in Malaysia.

LPF had said the movie distributor decided had refused to comply with certain conditions, including removing some parts that promote the LGBT lifestyle.

Thor: Love and Thunder, the fourth instalment in the Thor franchise, is directed by Taika Waititi and features a star-studded-cast that include Natalie Portman and Christian Bale.

The movie premiered in the United States and other countries on July 8.

Its US$302 million takings during the opening weekend made it the third highest weekend collection for any Hollywood movie during the pandemic and the second best of 2022, behind another Marvel movie, Doctor Strange in the Multiverse of Madness.

Do you also a fans of Marvel movies? Will you be sad if this movie is not released in Malaysia?