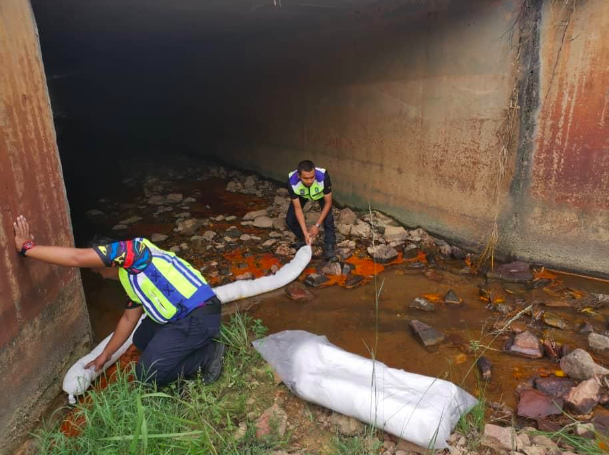 However, there was no water supply disruption.

The incident was detected by a 24-hour patrol unit from the Selangor Water Management Board (LUAS).

Selangor tourism, environment, green technology and Orang Asli affairs committee chairman Hee Loy Sian said the spill had made its way into Sg Semarang and then Sg Langat which was located only 700m from the water treatment plant.

“As part of the prevention and control measures, Air Selangor issued an order to shut down the plant to prevent pollution from reaching the plant.

“Based on records, there was no disruption to the water supply.

“LUAS had also activated a ‘Code Red’ alert based on the Emergency Manual for Water Source Pollution to launch a thorough investigation at high-risk areas,” said Hee in a statement Friday (July 29).”
Hee added that the early measures taken by PLUS Malaysia Berhad included providing 25 sawdust bags at the site to contain the pollution.

“LUAS officers then utilised an oil pad to prevent further flow of contaminants from the highway’s drainage and four oil booms in the culvert drains at two different locations to stop the flow into Sg Semarang,” he said.

Hee said the Sepang Environment Department had instructed the owners of the business to remove the remnants of the oil with the help of a LUAS-appointed contractor.

“Most of the spilled oil is contained within the highway’s drainage and drain walls.

“The Bukit Tampoi water treatment plant is expected to be operational again as traces of odour and oil are no longer detected in the water source.

“LUAS continued to investigate and sampling downstream from the site of the accident at the water intake at Bukit Tampoi until 3.20am today (Friday)," he said, adding that although no trace of oil was found at sampling poins, the samples will be sent to the Chemistry Department for analysis.