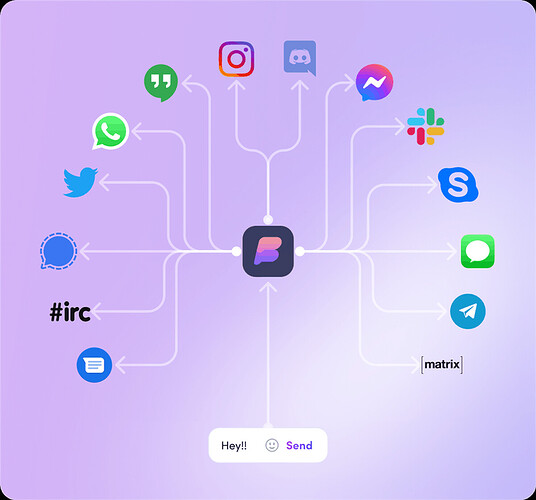 In light of the recent controversy surrounding WhatsApp‘s new and updated terms, users have understandably been looking at alternatives to the popular Facebook-owned messaging app. But of course, one of the main problems with this is picking an app that has… well, enough of your friends on the platform. Putting aside security and encryption protocols, there’s no point to a messaging app if there’s no one you know to message, if you catch my drift.

Some friends might opt for Signal, others for Telegram, and there is the obvious (in)compatibility issue between Android and iOS users who use iMessage. So, what if there was a way to combine all of the above—and more—within a single, universal chat app? Enter: Beeper.

What chat apps are supported in Beeper?

The list of supported apps is actually very extensive, with almost every messaging platform accessible within the Beeper app. The full compatibility list is as follows:

And yes, iMessage is supported—which is perhaps the most surprising/impressive addition to Beeper’s list of supported platforms. According to Beeper’s founder, Eric Migicovsky, who also founded Pebble (remember them?), getting iMessage to work with the all-in-one app was the most challenging. How did they even get around the iOS-shaped obstacle?

Founder Eric Migicovsky initially came up with the idea for a universal messaging app back in the days of Pebble, before the firm was acquired by wearable giants, Fitbit.

“We really wanted Pebble to be able to send iMessages, but we could never figure out a way to do it because there’s no API for iMessage.”

Two years ago, the Matrix protocol then gave solidarity to the idea, and Beeper was born. Matrix is an open-source, encrypted messaging protocol, which the Beeper platform is based on. In essence, Matrix works by using a bridge—one that can connect developers with other chat networks. Messages across different platforms are then relayed to-and-fro using this bridge.

What’s interesting about this, in relation to iMessage, is that Beeper actually ships a jailbroken iPhone 4s to use as a bridge. This means that the iPhone read and writes the iMessage database files, encrypts the messages, and sends it over the Beeper network. With regards to privacy concerns, Migicovsky says that even Beeper can’t read your message, which is how end-to-end encryption works. Your device—and your bridge—is the encryption key.

In any case, all of the code used in the bridges is available open source here. For now, you can sign up for Beeper at USD 10 (~RM40) per month, although the company appears to be onboarding users in stages. You can sign up for a spot in the queue by clicking this link, and the app is available on MacOS, Windwos, Linux, iOS, and Android.

Would you subscribe to Beeper or you will continue to use individual messaging app?