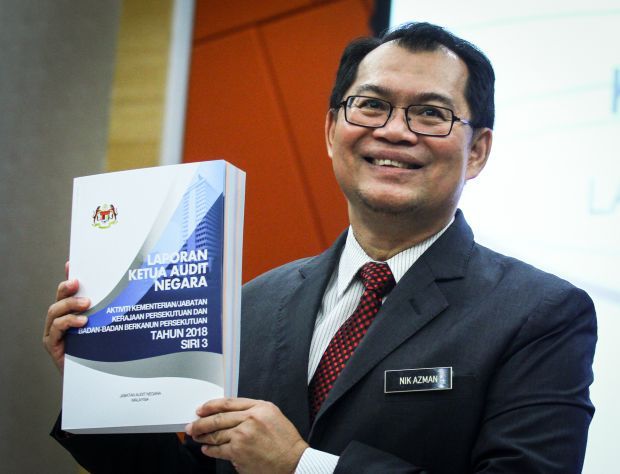 KUALA LUMPUR (Bernama): A total of 15 performance audits were carried out on RM15.71bil worth of programmes, activities and projects at 12 ministries for the Auditor-General’s Report 2019 Series 1.

Auditor-General Datuk Nik Azman Nik Abdul Majid (pic), in a statement, said the report was tabled in the Dewan Rakyat on Thursday (Dec 10) using the “card drive£” method and a QR code.

Generally, all federal government programmes, activities and projects are implemented according to the set objectives, he said.

However, he said, there are still weaknesses, such as the target “output” and “outcome” that cannot be achieved or cannot be evaluated.

To enable remedial and improvement actions by the heads of the department concerned, he said, the National Audit Department (NAD) had submitted 62 recommendations on the activities of the ministries, federal departments and statutory bodies.

Nik Azman said compliance audit of federal agencies was introduced as a new approach in line with International Standards of Supreme Audit Institutions (ISSAI) 4000 and 4100, where a total of 16 audits were carried out on 16 federal agencies, including nine programmes and projects, four procurements, two contracts and one loan.

It also aims to assess the extent where public money has been spent prudently, efficiently and effectively without waste and to get the best value for money, he added.

On the Financial Statements and Federal Agency Compliance Auditing in 2019, NAD had to audit the financial statements of 148 federal agencies for the 2019 financial year.

However, as of Sept 30,2020, the financial statements of 69 of them had been audited, 77 were still in the audit process, while two agencies had yet to submit theirs, he said.

He said 123 recommendations were submitted to improve the activities carried out by the ministries, departments and state agencies concerned.

"All officers and the relevant department heads have been informed of the matters reported in the A-G’s Report for verification purposes.

“(An) exit conference was also held to discuss the audit findings and get explanation and feedback, ” he added.

The Auditor-General’s Report 2019 Series 1 on the activities of ministries, federal government departments and federal bodies, as well as on Financial Statements and Auditing of Federal Agency Compliance 2019, will be uploaded to NAD website, after the tabling at the Dewan Rakyat.

At the state level, it can only be uploaded on to the NAD’s website after it is tabled at their respective state assembly sittings. – Bernama