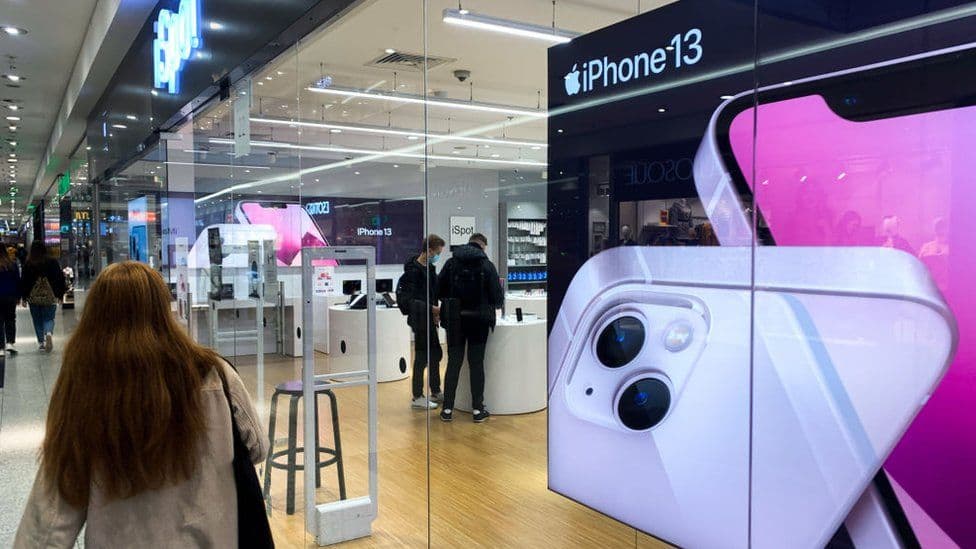 Apple’s shares dropped on Tuesday following reports it could slash its iPhone 13 production targets due to the ongoing global computer chip shortage.

The electronic giant had expected to make 90 million iPhones in the last quarter of 2021, reported Bloomberg

However, Apple was now having to tell its partners that the total will be lower by as many as 10 million units, sources told the business magazine.

Apple shares fell 1.2% in after-hours trading on the news.

Semiconductor manufacturers Broadcom and Texas Instruments were also down 1%, as sources said they were struggling to deliver enough chips to Apple in time.

The BBC has approached Apple, Broadcom and Texas Instruments for comment.

Media caption,Watch: How the semiconductor shortage could be a problem for you

Smartphone makers like Apple - some of the biggest chip purchasers in the world - have been severely impacted, but also other sectors like the car industry and the makers of video game consoles.

In July, Apple chief executive Tim Cook warned investors that the semiconductor shortage could affect sales of the iPhone and the iPad.

Investment firm Wedbush estimates that Apple will be running a shortage of more than five million iPhone 13 units for the holiday season, if consumer demand continues to keep pace with the number of iPhones being shipped for the rest of this year.

However, Wedbush analysts Daniel Ives and John Katsingris stressed that the chip shortage was a “not a worry” as they expected the smartphones to be available in the early part of 2022.

“Taking a step back, 5 million to 10 million units moving out of the December quarter into the March quarter due to well-understood supply chain issues is not a worry for us and ultimately speaks to a stronger demand trajectory than Wall Street had been anticipating,” they said.

“We view today’s news as nothing more than a speed bump on a multi-year supercycle iPhone 12/13 that continues to play out.”

Their views are shared by several other analysts, who have forecast that the new iPhone 13 models will have a strong sales year as consumers look to upgrade devices for 5G networks.