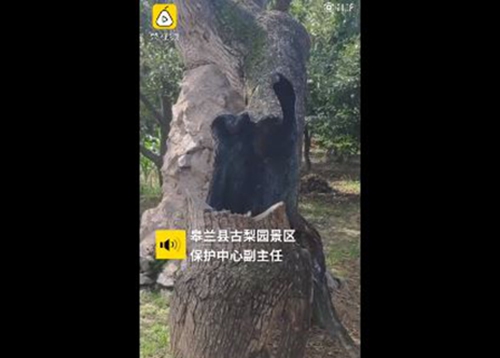 A 407-year old pear tree in Northwest China’s Gansu Province that was hollowed out by fire was found to still be full of life and able to bear fruit, media reported on Monday.

The tree, located in a pear garden in Gaolan, Gansu, thought to be one of the oldest gardens of its kind in the world, was accidentally set on fire by a child in 2016. Although the center of the tree has rotted away, the tree still survived. The outer shell remained intact and continued to transport water and minerals up from the roots to the rest of the tree, according to a member of management staff at the garden.

He said that the garden has been in touch with professional companies to carry out rescue work on the tree by filling the hollow with other materials, which is expected to extend the tree’s life.

Chinese internet users praised the vitality of the tree and demanded that the child’s parents’ pay compensation.

“I think everyone would agree that the rescue costs should be paid by the parents of the child,” commented another one.

It is amazing the tree still survive and tenaciously clung to life!!!

I think the old tree can live another 500 years