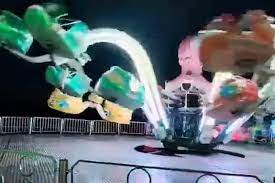 SHAH ALAM: Three individuals, including a child, were injured after falling from a malfunctioning fun fair ride in Puncak Alam near here.

Kuala Selangor district police chief Supt Ramli Kasa said a team rushed to the scene of the incident after receiving a phone call at about 8.50 pm.

Ramli said the victims comprised two women and a child.

“The three of them fell while the ride known as the ‘Sotong Ride’ was in motion. They were taken to Shah Alam Hospital in an ambulance,” he said in a statement on Monday (Dec 12) night.

He said the case would be investigated according to Section 6 of the Selangor State Entertainment & Places of Entertainment Enactment 1995 for operating without a licence.

Earlier, several viral videos and photos on social media showed the ride going out of control, which caused the victims to fall. – Bernama