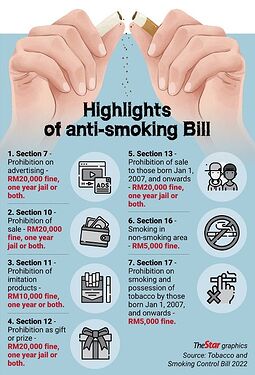 THOSE who are born after Jan 1, 2007, may end up paying a RM5,000 fine if they are caught smoking or puffing away on vapes or ecigarettes.

This will come into effect if the Tobacco and Smoking Control Bill, to pave way for the generational end-game laws to ban smoking among the young generations, is passed in Parliament.

The proposed Bill was tabled for its first reading by Health Minister Khairy Jamaluddin yesterday.

It not only makes smoking an offence for those born in 2007 and the years after; the law also bans the group from buying or being in possession of cigarettes and tobacco-related products.

Apart from this, shopkeepers and cigarette vendors are also not allowed to display tobacco products, and smoking devices as well as their substitutes or sell them to those covered by the ban.

Offenders may face a fine of up to RM20,000 or one year’s jail or both upon conviction.

In order to ensure the generational end-game on smoking is further cemented, the proposed law also prohibits advertisements of tobacco products or substances.

This includes advertisements that encourage smoking or promote tobacco products as a “quit smoking product”.

Failing that, the offenders can be fined up to RM20,000 or face a one-year jail term or both.

Individuals will also be prohibited from offering tobacco products or related substances as a reward, gift, or prize.

Failing that, offenders can be fined up to RM20,000 or jailed for a year or both upon conviction.

Offending companies may also be fined up to RM30,000 and sentenced to two years in jail or both upon conviction.

Besides curbing smoking among youths, the proposed law also addresses matters such as registering, importing, packaging, and labelling of tobacco and related products.

It will also be an offence for a person caught smoking in a declared non-smoking area that the public has access to.

Those convicted under this provision could face a maximum RM5,000 fine.

The proposed laws also provide for the setting up of a committee to advise the Health Minister if there is an “acute or critical situation” related to the use of tobacco and related products which endangers lives and public safety.

The minister could prohibit the importation, manufacturing, distribution or sale of tobacco and related products if such a situation arises.

The ministry had initially proposed the ban to cover those born before Jan 1, 2005, but increased the age limit to Jan 1, 2007.

The last-minute changes came amid uncertainty about support for the proposed law from some MPs.

On Monday, Khairy tweeted that the changes were made to allow for “community education, a robust implementation plan, and ramped up enforcement” before the law comes into force in 2025.

The proposed law is expected to be debated and passed during the current Dewan Rakyat meeting, which ends on Aug 4.