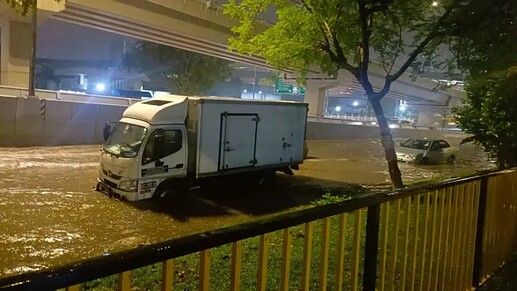 The Selangor Fire and Rescue Department said that the roads around Taman Sri Muda were flooded due to clogged drains despite the Sri Muda water lock being in operation, said its director Norazam Khamis who was quoted as saying by Bernama.

He added that the roads around the residential areas in Bukit Naga in Shah Alam were also flooded due to blocked drains.

However, Mr Norazam gave the assurance that the situation was under control as the rain had ceased.

Taman Sri Muda was one of the badly affected areas in last December’s floods in Selangor which caused several casualties and damages.

“Residents in the Taman Sri Muda area are advised to park their vehicles in high areas and monitoring is carried out from time to time. The situation is still under control," said Assistant Commissioner Mohd Iqbal Ibrahim as quoted by Bernama.

He said that the Shah Alam City Council has opened the Sri Muda Modern Market multi-storey car park for surrounding residents to temporarily park their vehicles in the event of a flash flood.

The Klang district disaster management committee has also established an onsite control centre that will operate around the clock at Taman Sri Muda to manage the possibility of more floods in the area.

In Kuala Lumpur, two areas – the Muhibah People’s Housing Project tunnel and parts of Jalan Kuchai Lama – were hit by severe flash floods after a heavy downpour in the city on Tuesday evening.

Flash floods were also reported around other parts of the city centre with some vehicles stuck in the water following a downpour.