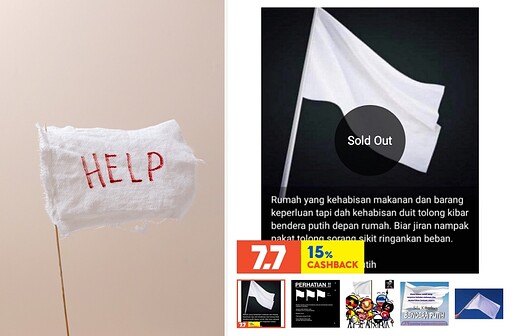 PETALING JAYA, July 7 — Online sellers have been touting white flags amidst the buying frenzy of July 7 sales, also known as 7.7.

Checks by Malay Mail found that a handful of merchants on Shopee are cashing in on the Bendera Putih aid movement and selling white flags for up to RM9.50 per piece.

Images that were previously shared to raise awareness about the movement are now being used by some sellers to advertise their products as well.

One seller boldly claimed that, “if (they) don’t provide the flags, how are people going to raise it?”

The product page indicated that the merchant had managed to sell 54 white flags for a price of RM5.50 each.

Another merchant selling white flags for RM9.50 each declared that they only have good intentions and expressed support for the Bendera Putih movement.

“We only help to prepare white flags. To those who are struggling and have no food, raise the white flag at your home.

“No need to beg, no need to feel ashamed. Just fly the flag.

“We support the Bendera Putih campaign,” wrote the seller in the product description.

Other merchants also described white flags as a “hot item” and urged shoppers to “buy now” in the product title.

One even went as far as to provide free shipping, but only with a minimum spend of RM10.

It was a similar scene over at Lazada where one white flag seller frantically encouraged customers to “buy today” in the product title.

Many of the merchants also offered wholesale options for interested customers.

Besides selling white flags, one vendor on Lazada made use of the Bendera Putih movement to make custom T-shirts with a picture of a white flag and a slogan that reads, “A caring rakyat, guarantees harmony.”

Each T-shirt is being peddled at a discounted price of RM23 each. 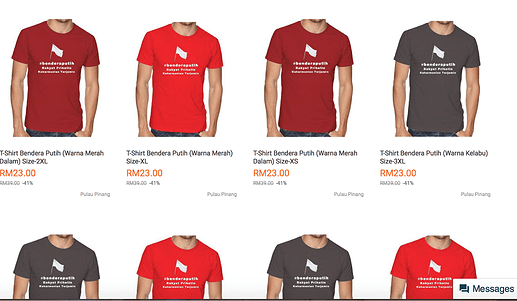 These sellers have been called out on social media, with one Malaysian saying it was a “capitalist” move to sell white flags at a time when the less fortunate are using it to cry for help.

“Capitalists be like, sell white flags on Shopee for RM100,” joked @izwansamani.

Another person said it made no sense to sell white flags when the people who need them the most would likely not have any money to start with.

The Bendera Putih movement gained traction on social media last week as a way of highlighting those who are struggling financially due to the repeated lockdowns under the Covid-19 pandemic.

The movement encourages people who need help to fly a white flag outside their homes which would then act as a signal for others to reach out and provide aid.

For those who desperately looking for help, they really wouldn’t have money to spend on the white flags. If you need help, just fly any cloth that is white color in front of house.