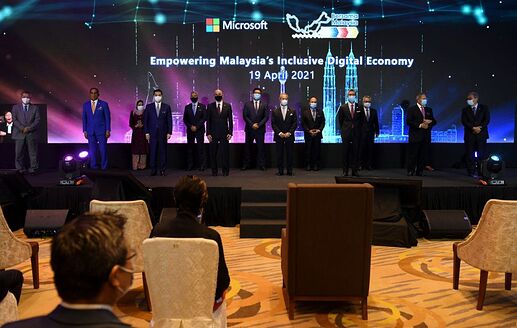 Global technology titan Microsoft Corp has announced plans to establish its first data centre region in the country under the Bersama Malaysia initiative.

“We are proud to cement out partnership with the nation to accelerate its digital economy.

“Microsoft’s Bersama Malaysia initiative reflects our joint commitment in support of the nation’s MyDigital aspirations, as we empower every person and every organisation in Malaysia to achieve more,” said Raman at the memorandum signing ceremony held at the Zenith Hotel here today.

The establishment of the data centre region is also a symbol of Microsoft’s US$1 billion (RM4.12 billion) commitment to Malaysia over the next five years, he said.

Raman said the investment would include building and setting up the data centre region here.

“At the same time, Microsoft has also pledged to skill one million Malaysians by 2023. The investment will include this as well,” he told reporters during a press conference after the signing ceremony.

According to Raman, the data centre to be located in Greater Kuala Lumpur it will deliver access to the full Microsoft Cloud which includes, Microsoft Azure, Microsoft 365 and Dynamics 365 and Power Platform.

“Microsoft has a global commitment to shift to 100 per cent supply of renewable energy by 2025.

“This means that Microsoft will have power purchase agreements for green energy contracted for 100 per cent of carbon-emitting electricity consumed by all its data centres, buildings, and campuses, including the planned Malaysia data centre region,” he said.

Through the Bersama Malaysia initiative, Raman said Microsoft was committed to working with the Malaysian government, startups and enterprises to support the country’s digital transformation goals.

Microsoft was previously appointed by the Malaysian Administrative Modernisation and Management Planning Unit (MAMPU) to provide cloud services to the Malaysian public sector agencies through 2023.

Present at the signing ceremony, Prime Minister Tan Sri Muhyiddin Yassin said the government will lead by example, firstly in migrating 80 per cent of its data to the cloud by the end of 2022.

“This migration and having a government super-app in the near future, will go far in widening the datasets, in order for the government to pull insights to identify societal issues and coordinate support for the needy.

“By understanding pattern behaviours and correlations, we hope to be able to use it for predictive analytics, and by addressing these issues will help improve public sector service delivery and empower the Rakyat,” said Muhyiddin at the signing ceremony.

Do you think it is good to open data center region in Malaysia?