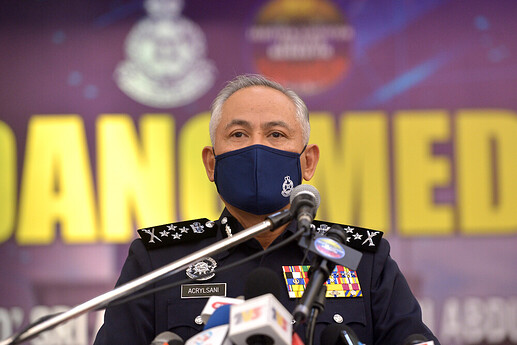 KUALA LUMPUR, April 27 — The Home Ministry today said that it would immediately summon a newspaper and an online news portal over their recent news articles on the Deputy Inspector-General of Police, (DIGP), Datuk Seri Acryl Sani Abdullah’s remarks about an alleged rape threat a student received from a classmate.

In a statement today, the ministry said that it viewed the matter seriously, and would call up the two news outlets “immediately, to obtain an explanation as well as further information regarding the media reports concerned.”

“The Home Ministry would like to advise media practitioners to uphold good journalistic principles to safeguard the credibility of the news reports published,” it said.

Earlier today, Bukit Aman’s IGP Secretariat issued a statement alleging that Malaysiakini and China Press used confusing headlines and failed to provide the full context of Acryl’s comments when he addressed the topic at a press conference in Shah Alam yesterday.

The case in question concerns two police reports lodged by a 17-year old student, the initial one aimed at calling out a teacher who allegedly made jokes about rape, and the second over an apparent rape threat she received from one of her classmates.

The student, Ain Husniza Saiful Nizam, gained attention after a social media post she shared related how the male teacher had supposedly made a rape joke during school lessons in the presence of both male and female students, with her exposé later triggering the alleged threats.

Acryl had made the disputed comments during the press conference yesterday when he confirmed the student made a second report over the alleged rape threat she had received.

Skandaguru today stressed that no element of the case has ever been considered a joke by the police, which he said took all reports seriously and was committed to thoroughly investigate the case.

Since Acryl’s comments, two female MPs have come out to condemn his comments, accusing him of brushing off rape threats as a joke, and even saying his comments also appeared to sanction violence against women.

What’s your opinion on this issue?