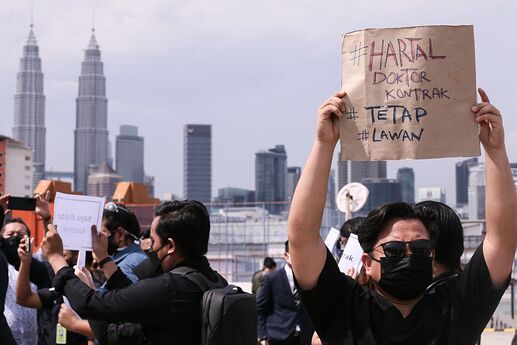 Amid heavy police presence at hospitals to maintain order and potential disciplinary action by their Ministry of Health superiors, supporters of the #HartalDoktorKontrak movement dressed in full black attire began their strike at 11am sharp at their respective healthcare facilities.

At the Kuala Lumpur Hospital, approximately 50 junior doctors clad in black led by one Dr Muhammad gathered at the open car park around 11.15am.

“We have no intentions to stage a demonstration but only asking for contract doctors to be absorbed into permanent posting. Many of one peers here have been involved in the treatment of Covid-19 since last year.

“For your information we have some 150 resignations because many are exhausted with the current system. We are asking the government to listen to our voice,” he said.

Their walk-out however was disrupted after a confrontation with the police. They were subsequently forced to disperse at approximately 11.27am.

At the Ampang Hospital, the group began its march from the lobby towards the Covid-19 swab testing area near the rear portion of the hospital before gathering to chant while holding aloft their placards demanding equal treatment.

A spokesman representing the group said the strike is aimed at highlighting the inequalities faced by contract doctors compared to their peers who are appointed on a permanent basis.

“We are exhausted and tired of waiting. The reasons given by the prime minister does not resolve the issue but merely a continuation of our contracts,” she said when met here.

The group dispersed roughly 10 minutes later and returned to their respective posts so as to not disrupt ongoing hospital operations.

In Johor Baru, moderate police presence was observed at Hospital Sultanah Aminah with a small team of Light Strike Force (LSF) on standby since 10.15am.

Some 12 to 15 doctors comprising medical officers and other health staff then began their walk out at 11am from hospital’s lobby rear and main entrance area.

The doctors, identified by their black attire with face mask and shields on, then walked around the main hospital block for 20 minutes before they stopped for a group photo and then dispersed to resume working.

At the Penang General Hospital, a group of doctors, dressed in black, started gathering around 11.20pm but were hesitant to make a move due to the presence of police and media at the hospital lobby.

The doctors stood around the lobby for almost 30 minutes before more joined them and proceeded to stage a symbolic walkout.

The group of about 30 doctors walked out at about 11.45am, followed by police and several Health Ministry personnel, including the state health director Datuk Dr Asmayani Khalib.

The group took a symbolic walk around the hospital building without stopping and re-entered the hospital through the emergency entrance to “go back to work”.

One of them, Dr Lise Chew Kai Soo, 28, said many of his colleagues were hesitant in the beginning due to the police presence at the hospital lobby.

“We are doing this for the future of everyone, not only the young doctors, it is about equal rights and human rights for everyone,” he said.

The third-year doctor, who has been placed in the Covid-19 ward since last year, said he is currently earning even lesser than when he was a houseman three years ago.

“I have not seen my wife, who is also a doctor in Sarawak General Hospital, for 11 months,” he said, adding the group only wanted security and a future for them instead of the ambiguous contract they were currently on.

He said there are more than 100 contract doctors in the Penang General Hospital but many have already left, with more planning to do so.

Dr Zakiah Hanim Zakaria, 29, who held a small cardboard placard with the word “Hartal”, said the whole exercise today nationwide is not only for the contract doctors but for the people.

In Ipoh, around 30 contract doctors from the Raja Permaisuri Bainun Hospital (HRBP) staged a similar strike while fully adhering to the standard operating procedures (SOPs).

The contract doctors, clad in black clothing, gathered at the hospital’s lobby and began walking out around 11.30am.

In the strike, which lasted about three minutes, the doctors walked out of the hospital without holding any placards and returned inside via the hospital’s emergency section.

However the media was prohibited from approaching any of the doctors to be interviewed on the orders of authorities at the scene.

In Sabah, where the Queen Elizabeth Hospital was earmarked as one of the hospitals for the hartal strike, police presence was more visible with at least four police vehicles parked at the main entrance and personnel and officers stationed around the entrance as early as 10am.

At 11am, crowds of hospital staff and media gathered to watch, but a protest by contract doctors failed to materialise.

By 11.30am, most of the onlookers had dispersed.

On July 23, the Cabinet said it had agreed to appoint medical officers, dental officers and pharmacists by contract for a period of two years once they have completed their compulsory service to ensure continuity of service and preparation for pursuing specialist studies.

The Cabinet also agreed to extend the contractual appointment to a maximum of four years for medical officers and dental officers who are pursuing specialisation studies during the contract period of the first two years.

However, the strike organisers said they would proceed with the walkout as the government’s announcement did not fundamentally resolve their complaints despite a call from Health director-general Tan Sri Dr Noor Hisham Abdullah to discourage the group.