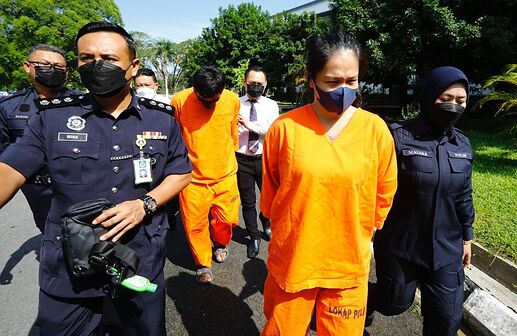 KUCHING: A babysitter and her husband have been charged with the murder of four-year-old Eric Chang Wei Jie, who was reported missing since March 7.

No plea was recorded from Wendy Chai Xue Zhen, 36, and Ling Kok Liang, 51, when they were brought before the Magistrate’s Court here on Thursday (March 31).

DPP Tan Chuan Yi prosecuted while the couple were unrepresented.

According to the charge sheet, Chai and Ling allegedly murdered Chang at a house in Taman Riverview in Bintawa here between 5pm on March 4 and 9.15am on March 7.

The couple were arrested on March 9 after Chang’s mother had reported him missing on March 7.

On March 13, police reclassified the case as murder after earlier investigating it for neglect or abandonment under the Child Act.

Police also launched a search operation for Chang on March 13 after the babysitter told them that the boy’s body had been dumped into the river at Muara Tebas near here.

The search was called off on March 19 after finding no clues of the boy.

He said police seized a car, three mobile phones, several CCTV recordings, clothes and other items related to the case.

“This is a tragic case involving a four-year-old child who was supposed to be taken care of by his babysitter but became a victim,” he told a press conference at district police headquarters here.

ACP Ahsmon added that the case was an isolated incident, urging the public not to speculate on the motive.

“It has nothing to do with organ harvesting or revenge,” he said.

What will be their motive to murder such a small age baby? The baby is innocence